Shane Lowry could be coming into form at the right time 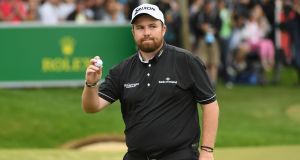 Shane Lowry: can focus on the positives ahead of the busiest time of the season. Photograph: Ross Kinnaird/Getty

For whatever dark clouds enveloped Shane Lowry on Sunday evening after his near-miss, a case of what might have been in the BMW PGA Championship, there was also – finally – a glimmer of light that he has turned a corner.

For one, it was the first time in almost a year that he’d been in contention in a big tournament down the home stretch; and, secondly, it resulted in the first positive upward trending on the world rankings this year.

At the start of this year, Lowry was ranked 43rd in the world and, following the Pebble Beach pro-am, where a tied-14th place finish constituted his best finish of the season to date on the PGA Tour, he had slipped to 51st. Since then, it has been a gentle slide downwards: 52nd after the Genesis Open; 63rd after the WGC-Dell Matchplay; 66th after the US Masters; 67th after the RBC Heritage; 70th after the Wells Fargo; 72nd after The Players.

In fact, Lowry went into Wentworth ranked 76th in the world rankings. When the rankings were updated on Monday morning, following Wentworth and the Colonial on the PGA Tour, Lowry had jumped to 69th. Okay, it’s a long way from the career best ranking of 17th he held at the tail-end of 2015, but small steps can generate into leaps.

Lowry need look no further than Alex Noren, the man who usurped them all at Wentworth, for a measure of inspiration. Bedevilled with injuries a number of season ago, the Swede had slipped to 704th in the world back in January 2015. Just over two years on, Noren’s latest win in the European Tour’s flagship event lifted him to a career-high eighth spot.

After a rather disrupted schedule in the earlier part of the season – necessarily so, it must be said, given the arrival of the couple’s first child – Lowry can now map out an itinerary of his choice. In effect, his quest to improve his FedEx Cup standings starts this week at the Memorial tournament (where he is joined in the field by Pádraig Harrington) and then there is the US Open at Erin Hills in just over a fortnight.

In his bid to move up the FedEx Cup standings stateside (he is currently 126th on that list), Lowry at least knows he can make serious inroads as he is in the field for the three remaining Majors of the season – the US Open, the British Open and the US PGA – and, apart from those critically loose swings on the 15th and 17th in the final round at Wentworth, his game would appear to be in good shape.

After he finished his round on Sunday, Lowry admitted it was hard to see any positives. But, in actual fact, the quality of his iron play and particularly his putting should provide impetus going forward for what is the meatiest part of the season. In terms of getting hot, this is the right time of the year for it to happen.

Lowry at least knows what itinerary lies ahead of him, which is a lot more than Rory McIlroy – who can be overtaken as world number two this week by any one of Jason Day, Jordan Spieth or Hideki Matsuyama – as the Northern Irishman continues his recuperation from a rib injury.

McIlroy’s withdrawal from the Memorial would indicate the nature of the injury is more severe than was originally revealed after his MRI scan following the Players.