Tiger Woods arrested in South Florida, Monday morning, reportedly on a driving under influence (DUI) charge. The former world number one golfer was reportedly taken into custody around 3am near his Jupiter Island home and released hours later. 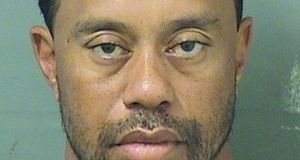 Tiger Woods was booked into the Palm Beach County jail on Monday after he was arrested by police in Jupiter, Florida. Photograph: Reuters

Tiger Woods was arrested in the early hours of Monday morning on charges of driving under the influence of alcohol.

The former world No1 was taken into custody near his home on Jupiter Island, Florida. According to Palm Beach County police, he was arrested at 3am, booked into jail around 7am and released at 10.50am.

Woods is the world’s most recognised golfer, although he has not played professionally since February due to lingering back issues. He has won 14 majors during his career but his last victory came in the 2008 US Open.

Last week, Woods said he had no plans to retire from golf, despite undergoing another surgery on his back in April. “We tried every possible non-surgical route and nothing worked,” said Woods of the fourth procedure he’s undergone on his back since 2014.

“I had good days and bad days, but the pain was usually there, and I couldn’t do much. Even lying down hurt. I had nerve pain with anything I did and was at the end of my rope. The process leading up to my decision to have surgery was exhaustive. I consulted with a specialist, and after weighing my options, that’s when I decided to go to Texas to have surgery.

“Presently, I’m not looking ahead,” Woods, 41, wrote on his website. “I can’t twist for another two and a half to three months. Right now, my sole focus is rehab and doing what the doctors tell me. I am concentrating on short-term goals.”

This is not the first time Woods has made headlines away from the golf course. His private life unravelled in late 2009 over allegations about affairs with several women and ultimately led to the end of his marriage.

Those allegations followed a bizarre early morning car accident outside his Florida home that rapidly ballooned into a fully-fledged sex scandal which turned his previously unblemished life and career upside down.

The golfer would later admit he was “far short of perfect” and regretted “those transgressions with all my heart.”