Rory McIlroy pleased with first start as he eases into 2020 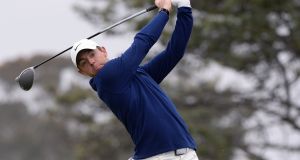 Rory McIlroy hits his tee shot from the fifth tee during the final round of the Farmers Insurance Open at Torrey Pines. Photo: USA Today Sports

Rory McIlroy failed to win the Farmers Insurance Open and failed too to regain the world number one spot in the world rankings. But the 30-year-old Northern Irishman narrowed the gap on Brooks Koepka (for the time being anyway) and, in bypassing the Phoenix Open this week, will return to competitive action in a fortnight’s time at the Genesis Invitational in Riviera with another chance to get to the top spot.

Of a third place finish behind Australian Marc Leishman at Torrey Pines, McIlroy – who had taken a long break from his clubs over the winter – observed he didn’t “feel 100 per cent” but was working his way back to how he felt last year in a season which garnered four wins.

“It’s just about trying to replicate those things that you were doing well the previous year. It’s not as if you’re trying to reinvent the wheel in any way, you’re just trying to strike it solidly, make sure you’ve got all your shots, fades, draws, high, low, and if you can do that and replicate that, then go work around the greens and work on your scoring clubs,” said McIlroy.

Koepka returns to tour duty in this week’s Saudi International on the European Tour, but the quest to be number one is more than a two-man battle. Jon Rahm, in the field at this week’s Waste Management Phoenix Open, could actually move to the top of the rankings if he wins in Phoenix and Koepka finishes outside the top-eight in Saudi Arabia.

It is these players at the top end of the golf rankings that have been wooed by those behind the concept of an elite world tour, which has been on the back boiler in recent years but of which talk has heated up in recent months as they seek to tempt the elite players into their ranks.

McIlroy, for one, has been approached. “Those guys have been talking to a few of us for six years. They approached me at the end of 2014. You know, it’s a hard one. I love the PGA Tour, but they definitely, these guys have exploited a couple of holes in the system the way golf at the highest level is nowadays and how it’s sort of transitioned from, you know, a competition tour to entertainment, right? It’s on TV, it’s people coming out to watch. It’s definitely a different time than what it was before.

“But I love the PGA Tour, I love the way golf is set up right now, so it might be the catalyst for something a little bit different out here as well, who knows? But I certainly wouldn’t want to lose what’s been built in the last 40 or 50 years, tournaments like (the Farmers Insurance Open), tournaments like (Genesis Invitational at) Riviera in a couple weeks’ time, everything that we have gotten to know and love over the years.

“I’m still quite a traditionalist, so to have that much of an upheaval in the game I don’t think is the right step forward. But I think, as I said, it might be a catalyst for some changes on this tour that can help it grow and move forward and, you know, reward the top players the way they should be, I guess.”

Leishman’s win – holding off Rahm by a stroke for his fifth career win on the PGA Tour – moved the Australian up to 20th in the world rankings. It was his first success worldwide since his Malaysian Classic win in 2018.

Without a top-10 finish on tour since last September, Leishman and fellow Aussie Cameron Smith had teamed-up in recent weeks to raise funds for those misplaced by the wildfires in Australia. Smith won the Sony Open a fortnight ago and Leishman’s latest win came on Australia Day. “I think karma’s a thing but you can never bank on it. I think if you do good things for long enough, not all the time but most of the time, you’ll get paid off for it. Whether it’s winning a golf tournament or just being a nice person,” he said.

1 On healing and wild hurling: The re-education of Diarmuid Lyng
2 Solskjaer unable to say if Paul Pogba will play for Manchester United again
3 Ireland backrow of O’Mahony, Van der Flier and Stander to be retained against England
4 Triple bogey costs Rory McIlroy as Adam Scott prevails at Riviera
5 Wexford best the weather and Kilkenny on a mad day to be hurling
Real news has value SUBSCRIBE