Tipping Point: Golfer could have done a small thing here at no real personal cost 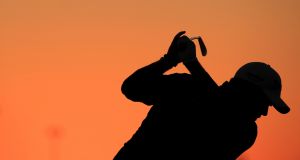 A silhouette of Shane Lowry as he practises on the range during day one of the Abu Dhabi HSBC Championship at Abu Dhabi Golf Club in Abu Dhabi, United Arab Emirates. Photograph: Andrew Redington/Getty Images

When it comes to the Saudi International golf tournament, the question has never been, “Why would you go and play there?”

It’s a biggish tournament by European Tour standards, one where the organisers are known to be notably generous when it comes to turning on the appearance fee hose, thus guaranteeing a strong field and a nice bank of world ranking points for anyone on a going week. By any golf-centric measure, it’s an attractive tournament.

No, the only question any golfer weighs up before committing – if they weigh one up at all – is, “What happens if I don’t go and play there?”

So, with all that in mind, the first thing that should be said about Shane Lowry playing golf in Saudi Arabia is that it won’t change a thing whether he does or he doesn’t.

The Saudi effort to scrub its human rights abuses from the public conversation will continue in full view of the watching world and with the ready compliance of forces far more powerful, wealthier and better known than he. The rampant success of the Great Saudi Sportswash won’t be affected one bit either way.

Combine those two truths and you have your explanation.

Put it this way, Rory McIlroy apparently turned down $2.5 million to play in it and cited moral grounds as his reason. It barely caused a ripple. It didn’t dent the tournament a whit – Phil Mickelson happily took his place and (reportedly) the cheque that came with it.

And McIlroy didn’t suddenly become Ireland’s favourite golfer on the back of it. That title isn’t even up for grabs – it’s Lowry’s for as long as he’s around. Even if McIlroy wins an Olympic gold medal this year, it won’t change.

So there’s probably no real point clutching our pearls over Lowry playing in Saudi. All the explanations and determinations his camp are making in the background are valid and make complete sense. It’s perfectly true that the tour plays in China, in Turkey, in Qatar and elsewhere without players having to justify themselves to anyone.

It’s equally true that that pop stars, celebrities and, far more significantly, governments and multinational corporations all carry out their business in Saudi without do-gooders in The Irish Times trying to shame them out of it.

It’s still wrong, though. It’s still a tawdry business to be involving yourself in. On some level, the golfers who go there must know this. They must surely realise that they’re stooges in a bigger thing, a dirtier thing. That they’re being used, that they’re having their fame and image and reputations co-opted by one of the most brutal and oppressive governments on the planet. They can’t not be aware of at least some of this.

Now, to a certain extent, they’re absolutely entitled to shrug this off. Once you reach the status held by people at the top of any professional sport, dealing with the outside world becomes a tug-of-war. You are desperate to keep back as much of your own life for yourself as you can while suspecting – usually correctly – that everybody who thinks they might be able to pull a bit out of you will do so.

So to Shane Lowry or Justin Rose or Dustin Johnson or whoever else, the Saudi government is likely pretty much indistinguishable from the endless list of sponsors, media, agents and other leeches that spin around them, intrusions from the unknowable outside world. The Saudis want to use my name? Listen brother, everybody wants to use my name. My job is to do the best for me and my family.

Which is fair enough. But there’s a flipside to it too. The privilege of being one of the best golfers in the world is hard-earned but it is privilege, nonetheless. And a key facet of that privilege is the ability to choose what your name means out in the world. Attach it to a sponsor or a charity and you are telling the world that you trust them to take care of it.

Attach it to something as nakedly rotten as the Saudi International and you are saying the same thing. Like it or not, you are allowing yourself to be allied with a regime that summarily crushes some of the things you take for granted. Basic women’s rights, freedom of expression, freedom to love whoever you want to. Stuff we don’t ever have to think about.

The Saudi government is using Shane Lowry’s name and Phil Mickelson’s name and Anthony Joshua’s name and Formula One and the Dakar Rally and Spanish football and Italian football and all the rest of it to say something very specific to the world.

It’s saying, “Here, look at these good guys who think we’re good guys. They could attach their names to anything and instead they’re happy to attach it to us. We are normal. We are not outlaws. There is no reason to shun us. These guys say so.”

Shane Lowry isn’t Clara’s answer to Rosa Parks and nobody expects him to be. But he could have done a small thing here at no real cost. He can have no quibble with anyone who thinks less of him for not doing so.