Mixed fortunes for Meadow and Maguire on LPGA seasonal bow 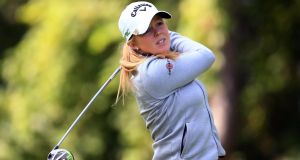 Stephanie Meadow opened her season with a 71 in Florida. Photograph: Vaughan Ridley/Getty

The contrast couldn’t have been more different for Stephanie Meadow and Leona Maguire as the two Irishwomen set out on their seasonal debuts on the LPGA Tour at Boca Rio Golf Club in Florida: where Meadow was the epitome in carding a bogey-free opening round of one-under 71 in the Gainbridge Championship, Maguire’s first start as a full member was a rockier affair as she carded a disappointing 79.

Meadow, who celebrated her 28th birthday last Monday, spent the winter break on a fitness regime - including spinning among her activities - and she hit the ground running with an error-free round that saw her record 17 pars and a lone birdie, on the second (her 11th hole) for a 71 that left her three shots adrift of clubhouse leaders, Japan’s Yui Kawamoto and Thailand’s Patty Tavatanakit.

While Meadow got onto the fringes of contention, it was an entirely different start to the season for Maguire who got off to a poor start with a bogey on her opening hole, the 10th, and then found herself on the back foot with a double-bogey six on the 11th.

In all, Maguire - who gained her full LPGA Tour card via the Symetra Tour last season, when she was a two-time winner - suffered two double-bogeys and four bogeys and her only respite came on the Par 5 first hole, her 10th, where she claimed her sole birdie.

Maguire has a mountain to climb if she is to somehow survive the 36-hole cut, with the top 70 players and ties progressing to the weekend, but the Co Cavan golfer’s onward itinerary will see her travel on to Australia for back-to-back tournaments.

Spain’s Carlota Ciganda, the world number 16 and a key member of Europe’s winning Solheim Cup team of last year, continued her run of good form with an opening round 69 to lie just a shot off the early clubhouse leaders.

American Morgan Pressel, who is a member of the club, had warned players in advance, “it is probably one of the most difficult courses in the area, (the greens) are super slick.” That warning proved prescient, as many players - among them European Solheim Cup player Charley Hull, who had an opening round 75 - struggled to cope with a stiff breeze and the firm greens.

1st Round suspended due to inclement weather