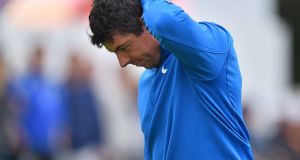 Rory McIlroy reacts after missing a short putt on the 18th green in the first round of the PGA Championship at Wentworth. Photograph: Glyn Kirk/AFP/Getty Images

On calm reflection, Rory McIlroy should be perfectly happy with his lowest career opening round at the PGA Championship at Wentworth. The Northern Irishman’s five-under 67 marked only the seventh time in 25 attempts that he has returned a sub-70 scorecard in the tournament. His post-round annoyance stemmed from the fact this appeared to be the highest number he could have posted.

McIlroy’s second shot to the par-five 18th was disrupted by an errant camera click. Irritation over that moment had just subsided when the 29-year-old missed a three-foot birdie putt. Such a troubled finish didn’t at all represent what had gone before.

“These things happen, I’m sure he didn’t mean it,” said McIlroy, who received an apology from the photographer in question in perfect grace. “It’s a tough enough shot without something going off at the top of your swing, but it’s fine.

“I think I did everything pretty well out there. I thought I gave myself a lot of chances, I took most of them. I’m a little frustrated I couldn’t get a birdie or two out of the last couple of holes but, overall, a really good start.”

McIlroy dropped two shots, both on the front nine, with seven birdies more than atoning for that.

After a low-key display at the Wells Fargo Championship and a missed cut at the Players Championship, this marked a sharp improvement. An early Friday tee-time affords opportunity to make further statements in this, an event McIlroy won in stunning fashion four years ago.

“If I can hit the ball like I did today over the next three days, I think I’ll be right there,” he added. “I played a lot better today than I have done the last couple of weeks so it’s a good step in the right direction.”

By close of play McIlroy trailed the pacesetting Lucas Bjerregaard by two shots. The Dane had played the outward nine in just 31 strokes while the South African duo Dean Burmester and Darren Fichardt pieced together fine 66s.

Matthew Fitzpatrick, like McIlroy, signed for a 67, as did Richard Bland. The 45-year-old Bland has not won on the European Tour since joining in 2002.

Shane Lowry was five under on the 18th but an encounter with bushes and a lake meant the Offaly golfer took seven and had to make do with a 69.

Paul Dunne had his own troubles on the 18th, a bogey six dropping him back to one under as he signed for a 71, while Graeme McDowell made par on the closing hole as he matched that mark.

Pádraig Harrington was the only Irish golfer to make a birdie on the closing hole, but it offered little in the way of redemption after he totted up a card featuring two double bogeys in a six-over 78. Former Ryder Cup captain Darren Clarke had to pull out of the tournament after injuring an ankle on Wednesday. – Guardian Service