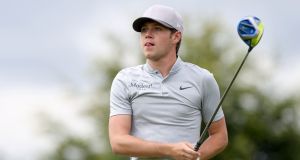 Niall Horan: “To support the Northern Ireland Amateur Open gives young players a chance to learn more about themselves and their game.” Photograph: Matt Mackey/Inpho

Not even the most innovative marketer could have planned it, so let’s just call it an accident that Niall Horan - an international singer with more than 40 million followers on Twitter and over 20 million on Instagram - likes golf.

Not only likes it, but is obsessed with it. He’s down to a single handicapper to boot, which suggests his day time when on tour singing has been well spent.

In terms of a poster boy for attracting youngsters to the sport, Horan’s image is a powerful calling card: indeed, his association as an ambassador with no less than Augusta National as an ambassador for the “Drive, Chip and Putt” programme to encourage young players to the sport is an indication of the Mullingar man’s global appeal.

There’s the other charitable side too, among them an association with Justin Rose to raise funds for children’s cancer on both sides of the Atlantic; and his work stateside was actually recognised by “Golf Digest” magazine who presented him with an “Arnie Award” - in memory of Arnold Palmer’s own charitable work - last year.

Closer to home, Horan hasn’t been shy about coming forward in helping out aspiring professionals.

His boutique sports management agency Modest! Golf has been associated with the Northern Ireland Open at Galgorm Castle in recent years (one of the most successful tournaments on the Challenge Tour) and now it has moved to back the Northern Ireland Amateur Open in July at the same parkland venue, with the winner earning a spot in the professional event.

“One of our main objectives starting with Modest! Golf was to support young talent . . . to support the Northern Ireland Amateur Open gives young players a chance to learn more about themselves and their game,” said Horan in confirming the new association.

Horan’s love for golf is reflected in his participation in high-profile pro-ams like those at the BMW PGA at Wentworth on the European Tour and the Genesis Open on the PGA Tour but his is more than a celebrity appearance or photo opportunity . . . he has gone the extra yards, raising significant funds for charity but also seeking to develop young golfing talent and his association with the two tournaments - one professional, one amateur - at Galgorm Castle is an indication of that commitment.

He’s a self-confessed golf nerd, who knows who knows the statistics - driving, putting, scrambling - on the main tours inside-out, but Horan’s true worth to golf could be that he makes the sport attractive to a young generation.

The recent Irish Sports Monitor report for 2017 showed that the numbers of golfers in Ireland has started to increase, with 4,600 joining golf clubs as introductory members last year. Of that figure, 3,000 were women and girls. There is a growth potential going forward and the association with Horan - be it direct, as in Modest! Golf’s support of tournaments and guiding young players, or indirect, as in his image and simply the fact that he has a golf club in his hands so frequently - can only be viewed as a positive for those trying to grow the game.