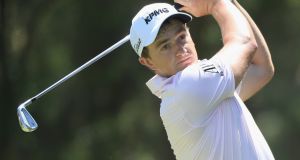 Paul Dunne: “I’ve had a good eight-week run, and my game is in good shape. I am hitting the ball really nicely, and my short game seems to be there.” Photograph: Getty Images

Paul Dunne’s upward trending – in the world rankings, on the money list – tells one story, yet so too does his tour schedule. Where two years ago, as he fought to retain his tour card in his rookie season, the Greystones golfer’s itinerary took him to some of the tour’s less glamorous outposts, his current tour stops are, quite literally, blue-chip tournaments.

The 25-year-old Wicklow man resumes tournament action at this week’s megabucks BMW PGA Championship – the flagship tournament of the European Tour – at Wentworth, with an aim of breaking into the world’s top 60 which would ensure a ticket to play at next month’s US Open at Shinnecock Hills in New York.

With a purse of €6 million, the BMW PGA is the first of this season’s Rolex Series, and also marks the start of the Ryder Cup points multiplier (money converting to one and a half times in points on the European qualifying table) coming into effect.

“So I am just concentrating on trying to keep my game in a good place, try do as well as I can every week, and see if I can give myself a chance to win,” said Dunne, one of six Irish players in the field at Wentworth.

The contrast in his playing itinerary to that of two years ago is quite dramatic, but Dunne sees it all as part of a plan that has worked out. As he put it, “when I played a couple of years ago that was the idea, keep your card so that you will be able to choose a schedule and it gets better. Then obviously if I get into the top 50 [in the world] it will be exactly as I want it. It’s kind of one of those things where you take things in your stride.”

That one-step-at-a-time philosophy also applies to keeping an eye on the world rankings. The next cut-off point to get into the US Open off those rankings (top 60) comes on June 11th, after the Italian Open. It means Dunne has two big money events in which to secure an exemption into Shinnecock Hill, although there is the back-up of seeking a place through the international qualifier at Walton Heath (following the Italian Open).

Yet for now Dunne’s focus is on the BMW PGA, where he secured a top 30 finish a year ago on his debut appearance. With a runner-up finish in the Spanish Open and a tied-seventh finish in the Volvo China Open, along with teaming up with Gavin Moynihan to win the Golf Sixes, Dunne is happy with his form heading to the stockbroker belt at Virginia Water, Surrey.

“Everything is good. I’ve had a good eight-week run, and my game is in good shape. I am hitting the ball really nicely, and my short game seems to be there. Things are good. These are two big weeks, and I’m looking forward to them.”

Of Wentworth, Dunne said: “I like the big tall treeline parklands anyway, so it should suit me. I played there recently. The greens will be really firm with that SubAir system, and they can put the pins wherever they want and make it as hard as they want. Hopefully it is a good week.”

There are six Irish players in the field, with Dunne joined by Rory McIlroy, Shane Lowry, Graeme McDowell, Darren Clarke and Pádraig Harrington. And, for Harrington there is the expectation that he will this week be added to Thomas Bjorn’s backroom team as a vice-captain for the Ryder Cup match in Paris.

Dunne – who is very much in contention for a place on that team – is an admirer of Harrington, who has been a vice-captain twice (in 2014 and 2016) before and has expressed an interest in the captaincy for 2020 in Whistling Straits in the US.

“I think he is the greatest sportsman Ireland has ever had. It is obviously debatable, and I am biased being a golfer, but he is great company, there is always something you can learn off him.

“He is not full orthodox, he does things his way. What I think is great about him is he is never afraid to try something, try it to see if it works. He doesn’t do it just to be different, he just wants to improve his game all the time...he is a great role model. I think he will be a very worthy Ryder Cup captain. I would love to see him do it. I would say he would be a great person for the job.”