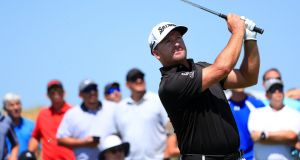 Graeme McDowell has been named as a Rycer Cup vice-captain for the first time ahead of the match at Le Golf National. Photo: Tom Pennington/Getty Images

Thomas Bjorn insisted he has not called time on the Ryder Cup playing careers of Luke Donald and Graeme McDowell after naming the duo to finalise a roster of five vice captains for the meeting with the USA in France.

Confirmation that Lee Westwood and Padraig Harrington would form part of Bjorn’s European backroom team – Robert Karlsson had been named earlier – was widely expected but the appearance of McDowell and Donald at Wentworth on Tuesday had not been predicted.

With Bjorn’s vice-captaincy team for September’s tournament now complete, the Dane has left the door open for his assistants to form part of Europe’s team.

“This is a conversation we’ve had in this group and every player that sits at this table is capable of making the team,” Bjorn said.

“If that happens, that’s a very positive problem because these guys as players on the golf course, what they can achieve as players, if they are in that form and they do those things over the summer that they have been able to do in the past in their career, then you want them in the Ryder Cup team. We’ll deal with that problem when we get to it.”

Westwood and Harrintgon have both expressed a willingness to captain Europe in the not-too distant future. Bjorn added: “All five are widely respected throughout the game, are all current players who are well known to the players who will be in our team come September and they also all possess a knowledge and understanding of what to expect from the golf course at Le Golf National too.

“You only need to look at the record books to see that their Ryder Cup pedigree speaks for itself. Each of them has played both home and away so they are well versed in the contest and know how to handle the special and unique atmosphere.

“They all possess strong personalities but each of them will also bring something different to the team, giving us great balance.”