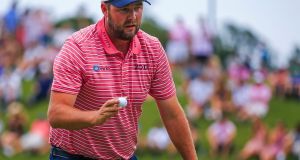 Marc Leishman has made a strong start in Dallas. Photograph: PA

Marc Leishman hit two eagles in a 10-under round of 61 to take a commanding three-shot lead after the first day of the AT&T Byron Nelson in Dallas.

The Australian set out his stall early — holing a short putt for three at the par-five first and notching up two birdies in the front nine to go four-under at the turn.

A trio of consecutive birdies followed and his second eagle of the day came at the par-five 14th from a 13ft putt.

Speaking after the round to The Golf Channel, Leishman said: “I didn’t even think about 59, every other time I have been close to it I have thought about it.

A chasing pack of eight sit a shot behind that and tied for fourth, while Ireland’s Seamus Power is at five-under with 11 other players.

Graeme McDowell carded a 67 to sit tied for 23rd, with an eagle on the par-five seventh cancelled out by dropped shots on the 9th and 18th.

Padraig Harrington’s round of 69 came after six birdies and four bogeys.

1 Connell losing touch with the club championship is the real tragedy of Normal People
2 Ghosts and goalposts: The soul of street football in Dublin’s Gloucester Diamond
3 Gerry Thornley: Coronavirus crisis could be terminal for Ireland's rugby clubs
4 Shane Ryan: Shark attacks and gruelling shifts on a Covid-free Atlantic mission
5 Sideline Cut: Vignette shows why Bird is the true shark in The Last Dance
Real news has value SUBSCRIBE