Tiger Woods: ‘I’ve got to start somewhere, I’ve got to get my game back’ 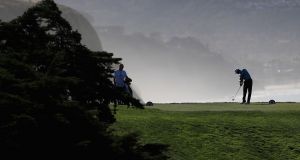 Tiger Woods admitted he does not know what to expect when he makes his first official start on the PGA Tour for a year in the Farmers Insurance Open.

Woods has won eight times at Torrey Pines, including his last Major in the 2008 US Open, but missed the cut in this event 12 months ago.

He withdrew after an opening 77 in the following week’s Dubai Desert Classic and sat out the rest of the year until returning from spinal fusion surgery with a tie for ninth in December’s 18-man Hero World Challenge.

“It’s all finished now, it’s fused and my quality of life is infinitely better than it was at this point last year,” Woods told a press conference on the eve of the tournament.

“I’ve got to start somewhere. I’ve got to get my game back. It’s been a long time, a full year since I’ve played on the tour.

“I want to hit shots and grind out scores. I’ve been looking forward to it. I’ve missed going out with my buddies having some fun playing golf. I miss those days.

“But my expectations have been tempered this week. I just want to get into the rhythm of playing a schedule again. I don’t know what to expect.

“As far as saying what it takes to win, I don’t know – and there are a lot of names I haven’t played with. We’ll see.”

Woods is rated 22/1 to win his first event since 2013, with defending champion and world number two Jon Rahm the favourite as he seeks a victory which would amazingly see him overtake Dustin Johnson at the top of the rankings.

Rahm only turned professional in June 2016, but won three times worldwide in 2017 and started this season with second place behind Johnson in the Sentry Tournament of Champions and victory in the CareerBuilder Challenge last week.

“I’ve said many times, beating Dustin Johnson is a really, really hard task,” added Rahm, who is now less than 1.4 ranking points behind the American.

“I’ll try to focus more on what’s going on this week rather than what comes with it if I win. I’ll try my best, that’s for sure. Hopefully it happens, but we all know how hard it is to win on Tour.”