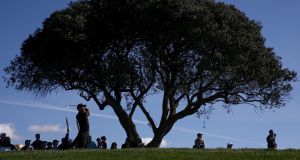 Tiger Woods plays his shot from the third tee during the first round of the Farmers Insurance Open at Torrey Pines in San Diego, California. Photo: Sean M. Haffey/Getty Images

Leader? No! Contending? No! And, yet, Tiger Woods – playing in his first official PGA Tour event in a full year – could take more positives than negatives from his opening round in the Farmers Insurance Open at Torrey Pines, where a level-par 72 on the South Course left him with a broad smile on his face.

As big-hitting Tony Finau claimed the first round lead after an opening seven-under-par 65 on the shorter North Course, Woods – returning to competitive action after spinal fusion surgery – showed signs of rust along with some sublime shots reminiscent of old, especially on the Par 3 16th where his six-iron tee-shot finished a matter of inches from the hole.

“It was fun, fun to compete again . . . . I was a little rusty. I’ve got to hit my irons a little better, didn’t give myself a lot of looks today,” said Woods after his round, one where he was outshone by playing partner Patrick Reed who opened with a 68, the same score as defending champion Jon Rahm.

Woods’s opening tee shot – his first in an official PGA Tour event for a full 12 months – was pulled left of the fairway and resulted in an opening bogey and there were signs of rustiness in the early part of his round, although a number of shots – his wedge approach on the 10th and the six-iron tee shot on the 16th – provided glimpses of his old self.

The big deal for Woods is that he is again – seemingly – injury-free, following a number of years when he has been badly troubled by back problems which necessitated spinal surgery last April.

Finau’s only tour win came in the Puerto Rico Open in 2016 but the big-hitting American’s 65 on the North Course gave him a one stroke lead over Ted Potter Jnr and Ryan Palmer.

Shane Lowry, making his seasonal debut, and Séamus Power – coming in on the back of an 11th-place finish in the CareerBuilder Challenge at La Quinta last week – both shot opening rounds of 69, three-under-par, while Pádraig Harrington had a level par 72.

Lowry, who has moved his family to a base in Florida so that he can concentrate on playing the PGA Tour for the first part of the year, said: “I played good all day. I was very happy, any time you break 70 on either of these courses is nice. The greens are unbelievably firm and it is hard to get the ball close to the hole...... I love (tough tests), it is one of my favourite stops of the year. Hopefully I can get into contention for the weekend.”