Rollercoaster ride for Tiger and Rory as McDowell finds form 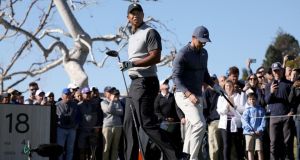 After a dismal start to the season, which saw him miss three cuts in three tournaments, Graeme McDowell emerged from the shadows in the first round of the Genesis Open at Riviera Country Club in Los Angeles where the 38-year-old Northern Irishman opened with a two-under-par 69.

With most eyes focused in on Tiger Wood as the 14-time Major champion continued his comeback following spinal surgery, playing alongside US PGA champion Justin Thomas and former world number one Rory McIlroy, it was McDowell who signalled a long overdue return to form.

McDowell, who once ranked as high as sixth in the world but whose dip in form has left him currently wallowing in 219th position, had missed cuts in Abu Dhabi, Dubai and Pebble Beach in his three previous outings.

But a marked improvement in form saw him feature at the business part of the leaderboard with a 69 that sees him trail first round leaders Tony Finau and Patrick Cantlay (66) by three shots. McDowell opened with a birdie on the Par 5 first and then chipped in for a birdie two on the Par 3 fourth before sinking a 12-footer on the seventh for his third birdie of an impressive opening round. His only bogey came on the 13th, where he missed the green with his approach and failed to get up-and-down.

The feature group of Woods, McIlroy and Thomas had an adventurous time of it, with Woods losing a ball on his second hole - the 11th - after a wayward drive which led to a double bogey. Woods, though, held it together well to open with a one-over-par 72; McIlroy, too, has his travails on the opening holes but also battled back for a level-par 71, while Thomas captured the bragging rights from the group with an opening 69.

“It’s fun,” said Thomas of playing in a group with Woods, “it just happens to be one of the greatest golf icons that ever played.”

Woods had a rollercoaster ride: he had five birdies, mixed with a double and four bogeys. “It was a decent start, lot of birdies and a lot of bogeys . . . I had one stay up in a tree on 11 which was a little weird. The course is playing tough, the greens are firming up, that first hop is amazing, really springy especially going downwind,” said Woods, who returned to tournament play at the Farmers Insurance at Torrey Pines two weeks ago when he finished tied-23rd.

McIlroy opened with a birdie on the driveable Par 4 10th where he recovered from a wayward drive and then putting his approach into a greenside bunker and then holing the recovery shot, only to stumble with bogeys on the 11th, 12th and 17th to turn in two-over. “All a bit scrappy,” he said. However, the highlight of his round came on the Par 5 first where he rolled in a left-to-right breaking putt from 30 feet for an eagle and then reeled off eight straight pars to sign for that 71 that he admitted was “a fair reflection” of how he played.

After his putting woes in missing the cut at Pebble Beach last week, McIlroy spent time at the TaylorMade R&D plant and emerged with a new putter that has added loft. “It’s basically the same shape, just a little bit different in terms of loft and lie and stuff like that, so better for poa annua greens,” said McIlroy, seeking to regain his early-season form which brought a third place finish in Abu Dhabi and a runner-up place in Dubai.

Of those putting on such greens, McIlroy said: “I’m still in decent position . . . (putting) is more of a mental test, because all you can do is start the putt on your intended line and try to hit it with good speed and it is not up to you after that, it is sort of up to gravity. It is very mental, and I didn’t pass that mental test last week in Pebble and I am trying to stay more patient this week.”

McIlroy has become close friends with Woods, although has only infrequently played alongside him in competition and has admitted to being “a fan” of the player who dominated for a generation. “I think anyone that’s my age and even a little bit older and a little bit younger was inspired by him because of what he did on the golf course and how he approached the game. I mean, he was golf for the better part of a decade if not more . . . whenever you get a chance to play alongside one of your heroes, it is always nice,” he observed.

Pádraig Harrington also opened with a level par 71 - eagling the first, but only managing one birdie to go with three bogeys - while Shane Lowry opened with a birdie but struggled for the most part after that, finishing with a 73 that featured two birdies and four bogeys.