Woods gets down to business as comeback continues 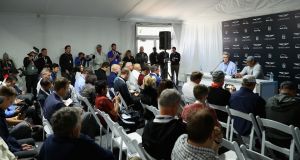 There’ll be no more mister nice guy when Tiger Woods tees up at the Genesis Open starting at Riviera. After spending the past couple of years more a calm and cuddly mentor than a ruthless competitor as he dealt with a potentially career-ending back injury, Woods is ready to assume his erstwhile role as a steely-eyed assassin.

He will play the first two rounds in Los Angeles this week with Rory McIlroy and Justin Thomas, the latter experiencing his first competitive round with Woods.

“I don’t care how they react,” Woods said when asked how he expected today’s young breed to deal with what he hopes is his re-emergence as a serious challenger. “I’m trying to win a tournament (and) I’m sure they feel the same way but hey, it’s winning time. I think now they’re starting to see me as a competitor because I’m starting to come back again.

“For a while that wasn’t the case. I was just a person they could bounce ideas off. They would pick my brain, but now it’s more as a playing competitor. We still give the needle and have a whole bunch of fun but also they know I’m playing a tournament and so are they.”

Riviera, where Woods made his PGA Tour debut as a 16-year-old amateur in 1992, is the only course on the PGA Tour where he has played more than 10 tournaments without a victory. He used to be a regular, competing in what formerly was his hometown event known as the Los Angeles Open 11 times, before scrubbing the tournament from his schedule after 2006.

Relatively short and tight by modern standards, Riviera did not suit a long-hitting young Woods but he might find it more to his liking now as a 42-year-old, still able to hit the ball a long way but no further than many of his peers.

Woods is not quite ready to predict a timeline for where his results are headed, despite a respectable tie for 23rd at Torrey Pines three weeks ago in his first appearance of the year. He will certainly have stiff competition this week from a field headed by world number one and defending champion Dustin Johnson.

“Eventually I’d like to win tournaments,” Woods said. “I am trying to get through that process to get to that point. I’m making small, subtle changes in my posture and my swing because I’m starting to understand my body a little bit more because this back is just different than it used to be.”

Tommy Fleetwood, meanwhile, will make no excuses as he looks to become a global star and major champion by competing on both sides of the Atlantic. Fleetwood won twice on the European Tour last season on his way to topping the year-long Race to Dubai and started 2018 in superb style by successfully defending his title in the Abu Dhabi HSBC Championship.

However, the 27-year-old is not content with being a big fish in a little pond and, despite becoming a father for the first time recently, will compete on the PGA Tour and European Tour this season, a move which has not always paid off for Europe’s elite.

“I guess the next stage in my career would be to win a PGA Tour event and move up that way,” Fleetwood said in California. “It’s great to have the opportunities to come out here and play. If you want to be one of the world’s best players, you have to do it in America.”