Julio Bell managed to break 100 on the second day, only he did it the wrong way 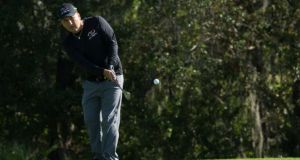 Colombian amateur Julio Bell missed the cut by a spectacular 56 shots at the Club Colombia Championship after struggling to second round of 105.

Yes, you read that correctly: one hundred and five shots.

The 52-year-old local has caused controversy at the Web.com Tour event – the secondary tour to the PGA Tour – by receiving an invite to play the tournament for a second time, despite carding rounds of 99 and 92 in the same event two years ago.

The former boxer took up golf just five years ago and, according to local newspaper reports, now plays off a handicap of one. The local paper also alludes to the fact that Bell is able to pursue his golfing dream thanks to investments and a Colombian business he owns with his wife.

However, the dream was certainly more like a nightmare this week as he made just four pars in 36 holes without a single birdie on the card.

Thirteen bogeys, three double bogeys and a triple bogey left him with quite the mountain to climb after a first round of 93 on Thursday. Unfortunately for Bell a miraculous change in form did not occur overnight and the second round got even uglier as he managed to break the 100 barrier. The wrong way.

Friday’s second round got off to a difficult start with three consecutive double bogeys putting to bed any good feelings he may have had before the round. A solid par at the fourth proved to be false cause for optimism as it was followed up by a bogey and two doubles. Another par at the eighth tripled his total number for the week before a catastrophic quadruple bogey at the ninth saw him go out in 50 shots.

As things stand Bell sits 63 shots behind the lead.

Bell’s inclusion in the tournament is thanks to his local ties but it has drawn much scorn from players and caddies alike. Previous invites for the likes of basketball player Steph Curry and singer Jeff Owen to Web.com Tour events have caused a lot of controversy with many slating tournaments in question for not giving the chance of a start to fringe players who actually make a living from the game. Much of the same sentiment has been heard recently following the news that former NFL star Tony Romo will play at next month’s Corales Puntacana Resort & Club Championship on the PGA Tour.

However, at least Curry didn’t disgrace himself at last year’s Ellie Mae Classic when he missed the cut with consecutive rounds of 74 while judgement has to be reserved on Owen as he won’t tee it up until the Nashville Golf Open next June. Bell’s record, on the other hand, suggests he is nowhere near up to the standard to even attempt to mix it on the professional circuit.

With seven-time European Tour winner Gonzalo Fernandez-Castano near the top of the leaderboard and the likes of PGA Tour winner Jason Gore also in the field, it’s clear that the event is of a very high standard.

However, the real people struggling from Bell’s farcical invite are his playing partners. Web.com Tour rookie Jimmy Stanger and 28-year-old Jim Knous who are both fighting to make the cut at level par and three under respectively – the cut mark is currently projected at level par.

Surely it can’t be very helpful to the two pros to slog around with a man shooting 105 with absolutely no track record to merit a place in the event.

Perhaps Bell would be best off shelving his ambition of playing with the pros for good after this showing.