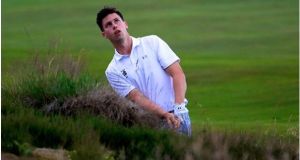 Alex Gleeson from the Castle Golf Club who finished 13th in the South African Strokeplay championship at the Pecanwood Golf and Country Estate, South Africa.

A bogey at the last cost Gleeson a top-10 finish but he was never going to catch Gillberg, who beat the previous record aggregate set by Richard Sterne at Oppenheimer Park in 2001 by five strokes.

Despite finishing with three bogeys Newlands’ Jake Whelan still posted a one-over 72 to win the gross in the TaylorMade Winter Series at Portmarnock Hotel & Golf Links.

Playing off plus two, the Leinster interprovincial went out in one-under par and while he got to two-under with three to play, his untidy finish did not stop him taking the gross by three shots from Mullingar professional James Quinlivan, whose 75 edged out international Paula Grant on countback.

Overall victory might have gone to professional Iarlaith Keane, who was one-under par standing on the 18th tee but finished with a quadruple bogey eight. However, his 74 gave him the best nett prize by a stroke from Malahide’s Manuel Alvarez.

The 48-strong field played into a stiff northerly wind on the back nine and with no snow to trouble them, there were some gritty performances such as a 79 by four-handicapper Gavin Keogh.

Playing off two, Alvarez followed his overall nett win three weeks ago with another prize-winning performance, going out in three-over par before coming home in 38 despite bogeys at the 14th, 17th and 18th.

Kane a clear winner in Hilary

John Greene won the gross but Ashbourne two-handicapper Peter Kane was the clear winner of the opening Hilary Golf Society outing of 2018 at Portmarnock Links.

On a testing course his two-under 69 was six shots clear of Beech Park’s John Keogh (5) with Castle’s John Williams (2) third after a 76.

Former South of Ireland winner Greene, who was playing off plus one, shot a fine 74 to win the gross. Kane was joined on the winning team by The Royal Dublin’s Tony Judge and John Hutchinson and Athy’s Kealan Bolger with a 66.

The next outing takes place on February 18th in Seapoint.

Rice in command at Druids Heath

The Limerickman scored 36 points to win by four from Druids Heath’s David Gilsenan with Paul Mahoney a point further back in third.

PGA professional Greg Leech won the gross on a countback from Marc Nolan and Manuel Alvarez with 30 points while Druids Glen professional Patrick Geraghty leads the Order of Merit by four points from Nolan.

The top 20 on the Order of Merit at the end of the season will join the 16 weekly winners in the Grand Final at Druids Glen on March 18th.

Damian Mooney claimed a rare double in the Ulster Golf Alliance at Royal Belfast. “Always very grateful to win but to do the double in the team and pro individual is a rare treat,” the big-hitting Belfast man said.

He had 38 points to win the individual prize by one point from Massereene’s David Hughes and New Zealander Andrew Peoples from the Darren Clarke Golf School.

Having been piloted in 2016, the Golf4Girls4Life (G4G4L) Programme, created by the Confederation of Golf in Ireland (CGI) and the Irish Ladies Golf Union (ILGU), is now in its second official year.

In 2017, the programme saw over 170 volunteers and 34 PGA Professionals from 85 clubs educated on the importance of having practices and structures in place for girls. The programme has been derived through feedback from young girls themselves and for CGI Development Manager, Anne Brett, this is the key component of the framework;

“When we set about designing G4G4L our main goal was to get as many girls playing as possible. Rather than us, as adults, assuming what the girls wanted we decided to ask them what they liked and what they wanted from golf through focus groups.

“These focus groups have helped shape G4G4L into a programme that is focused on fun, inclusion and empowering each girl to be the best that she can be. We often hear that every junior’s dream is to play on tour, to play for Ireland, to be a scratch golfer but actually when we spoke to the girls the majority of them just wanted to be in an environment that allowed them to have fun with their friends and this is the message that we are trying to convey through this programme.”

Through feedback from those clubs involved in the programme in 2017, over 50 per cent introduced the G4G4L Player Progression Guide, while 55% introduced more social events and off - course activities for their girls. Furthermore 100% of the workshop attendees stated that their learnings would be beneficial to them and their girls.

Moira Cassidy, one of the most popular figures in Dublin golf circles, is to take on a new role as Golf Sales Director at Portmarnock Hotel and Golf Links. The new role for Cassidy is one of a number of changes to the golf team at the Links which has just reported a very successful year in 2017. Club professional Conor Russell will now be fully responsible for the day to day golf operations while Niall Carbery will look after group golf.

The announcements follow a highly successful 2017 for the golf operations at Portmarnock Hotel and Golf Links which has seen green fee income rise and has also seen 70 new members join the golf club side of the operation for the 2018 season.

Cassidy, a former Irish international golfer, began her career in golf administration with the Leinster branch of the GUI. She joined Portmarnock Hotel and Golf Links as Director of Golf on its opening in 1995. She was heavily involved in both Irish Ladies Open and the Special Olympics World Games when those events were held at the venue.

Conor Russell was appointed Portmarnock’s first resident professional in 2017 following successful spells at Mount Juliet, Headfort and most recently Sutton golf clubs. He spent 12 years at Sutton before his move to Portmarnock Links.

Cork’s Brian O’Donovan clinched his PGA Tour China card at Mission Hills Haikou on Hainan Island over the weekend. After an opening 68 he followed with a pair of one-over 73s, leaving him a shot outside the all-important top 15 heading into the final round. But didn’t give up and was one-under for the final round with two holes to play when he bogeyed the 17th to fall outside the top 15 who were awarded cards.

American Joseph Winslow closed with a 69 to top the qualifiers by four shots on 12-under 276 from compatriot Ryann Ree as Korea’s Myunghwa Hong came through a four-way playoff for the 15th and final place.

Noel Murray, formerly with American Golf in Ireland, finishing 99th on 312 after a closing 81.