Hosting Amateur Championship at male-only Portmarnock does golf no favours 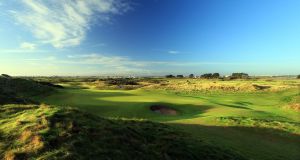 A view of the 12th hole at Portmarnock Golf Club in Dublin. Photograph: David Cannon/Getty Images

The job description for chief executive of the R&A does not include a necessity to defend the indefensible. That may be a mistake. As the Open continues to expand into fresh commercial territory and golf finally appears willing to limit driving distances, old prejudices remain. They remain intrinsically linked to the R&A, the body responsible for governance of the sport.

What is galling is an apparent unwillingness to admit the existence of prehistoric attitudes. You needn’t even dig terribly deep to discover them. Next year’s Amateur Championship will take place at Portmarnock, a stunning links on the outskirts of Dublin. There is a hardly insignificant catch - this club retains a male only membership policy, to the point where a 2015 consultation exercise aimed at possibly changing stance barely got off the ground.

The R&A, so firm with its insistence that Muirfield would not host the Open until female members were permitted - as eventually was the case - is reasonably accused of blatant double standards. Its feeble explanation resonates in supposed obligation. “What we said was we want to take our championships to clubs that have mixed membership,” said the R&A’s chief executive, Martin Slumbers.

“But we also said that where we had contractually already agreed, we would honour that contract. And we had already agreed with Royal Aberdeen [for this year’s Amateur Championship] and with Portmarnock, and I also think it’s important that one honours one’s contracts.”

This raises eyebrows. If the R&A, years in advance (the decision was confirmed in 2016), cannot fairly extricate itself from a deal to host amateur golf’s prime event then its legal department is in need of review. More striking is the unwillingness of Slumbers to accept the dismal message this Portmarnock alliance sends.

“It’s not contradictory in the sense that honouring a contract is a decent way of doing business,” he added. “We had done that [DEAL], and we’re very clear on that. And new events, we’re also very clear on.

There’s more. Muirfield, which 11 months ago finally confirmed a willingness to move to mixed gender status, has a grand total of zero female members. “It does take time to get through the process in these clubs,” Slumbers insisted. “With any club you’ve got to identify who wishes to apply and then it needs to go through the process.”

In reality, that process can take as long or short a time as any golf club decides. Muirfield, now away from the public glare, is in no hurry at all. Slumbers is clearly a decent, well-meaning individual but he does golf no favours by passing off these matters as perfectly reasonable. All the fancy Open-marketing campaigns in the world cannot hide this embarrassment, of the kind which fatally undermines golf’s broader appeal.

In 2018, this is depressing stuff. The Royal and Ancient Club of St Andrews itself has only 14 female members from a total of around 1,800 but they, at least, were fast-tracked in a manner Muirfield was typically unwilling to apply. In the R&A clubhouse, a list of newly admitted ordinary members contains only male names.

Slumbers is hardly to blame for the awkward scenario surrounding Turnberry, an outstanding championship venue but one owned by a certain Donald Trump. The Open has not been held at the Ayrshire course since 2009 and won’t be until at least 2023. Even that may be a stretch, with Muirfield likely for that edition of the major and Scotland therefore unlikely in 2024.

In 2025, St Andrews will almost certainly stage the tournament. Economic realities - Turnberry attracts the lowest crowd of the Open pool courses - are obviously pertinent but it is Trump’s presence which means the R&A is so keen to kick this issue into the deep rough. “It would be very complex having an Open at Turnberry at the moment,” admitted the chief executive. “You’ve got the ownership issue of the course and the staging there, and we want to make sure that we stay true to the golf, the playing of the golf.”

In other words, the R&A can well do without the circus such an Open would - presently, at least - entail. There is, however, a fresh willingness to rein in shot distances. This matter has rumbled on for years, as linked to the depressing necessity for courses to drastically increase their lengths as a protective feature. The most simple solution would seem to involve changing golf ball specifications but the R&A understandably treads carefully for now as to what options may be available. An announcement is expected in the next month or so. The sin for golf is that such progression isn’t multifaceted. Guardian Service

1 Jackie Tyrrell: Winter is here and a machine-gun Championship awaits
2 Irish duo set for AFL Grand Final as sport lifts the gloom Down Under
3 Barbarians match in doubt after 12 players go on unauthorised night out
4 Colin Byrne: Hard to understand how golf has become the bogey man now
5 Fresh faces and renewed appetite: Is this a new era for Irish rugby?
Real news has value SUBSCRIBE