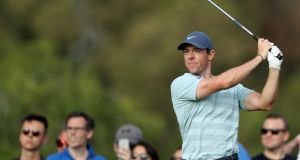 One former world number one offered rare praise to another on Wednesday as Jason Day said Rory McIlroy had ‘Tiger-esque’ skills on the golf course.

Day was speaking on the eve of the Pebble Beach Pro-Am, an event that was almost withering on the vine a few years ago, but which begins on Thursday with a field that includes the world’s three top-ranked players and several former number ones.

Current number one Dustin Johnson heads the field on the California coast, though his ranking could be threatened if number two Jon Rahm wins.

Defending champion and world number three Jordan Spieth will seek to bounce back from a rare missed cut last week, while McIlroy and Day are keen to build on recent strong performances.

Four-times major winner McIlroy is using Pebble as the start of a busy PGA Tour campaign leading up to the US Masters in April.

After two strong performances in the Middle East recently, albeit without a victory, he is eager to make the most of his good health.

“I haven’t played a whole lot over the past 18 months for various reasons,” the 28-year-old told reporters on Wednesday.

“Not really making up for lost time but just miss playing competitive golf.

“There’s nothing in my way stopping me from playing a pretty full schedule so it’s nice to start here in California and work my way back east, and play a couple of tournaments I’ve never played before so I’m excited for that.

“I think once I get to Augusta one excuse I won’t have is not being prepared, and being under-golfed.

“I will have played a lot of tournament golf leading up to it. I wanted to do it last year as well, wanted to play a heavy schedule, but the (rib) injury didn’t allow me to do that.”

If McIlroy needed a shot of confidence, Day was happy to provide it.

“I think the biggest thing for Rory is how, like the desire part, how much do you really want it because he has the tools to be kind of Tiger-esque,” said Day, who won his last start at Torrey Pines two weeks ago.

The 30-year-old Australian said he may need to capitalise on that good form as he seeks to add to his lone major title, the 2015 PGA Championship.

“I’m not saying my time is running out but I need to step up here and start playing some good golf.

“It’s not like I need to urgently get out and play well this week and everything’s riding on this week.

“I’ve just got to do the right things, prepare well, go through the right steps on the golf course to get myself into contention.”

Despite the venue’s fame, the event had been mostly ignored by the world’s elite in recent years but it has regained its attraction with the top players embracing the pro-am format.

The field play one round each at three different courses, before the cut is made after 54 holes for the final round at Pebble Beach.

Leinster get the job done against Ospreys 21:34
Prolific Lewandowski still at the height of his powers 21:01
Weekend Premier League team news 19:53
Donnacha O’Brien gets off the mark with first training success 19:03
O’Leary calls for Cheltenham Champion Bumper to be restricted to amateur jockeys 18:00
Here is your handy guide to sport on television this week