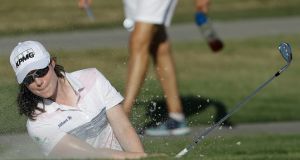 Leona Maguire missed the cut at the US Open in South Carolina. Photograph: Steve Helber/AP

Portmarnock Golf Club has commenced a fresh consultation process with its membership to determine if the existing men’s only policy will be retained or changed to allow women members, a requirement which would enable the famous north county Dublin course to host future major international championships run by the R&A.

The club, celebrating its 125th anniversary, is due to play host to the 124th Amateur Championship later this month, having been awarded the event prior to the R&A’s decision (on its amalgamation with the Ladies Golf Union in 2017) to only stage future championships at venues with no gender restrictions.

“What we are doing is honouring commitments made,” said Duncan Weir, the Executive Director-Golf Development and Amateur Events at the R&A, speaking in Portmarnock ahead of this year’s championship. “Our policy going forward is that we will not award events to clubs which have a single sex membership . . . that’s the black and white of it to be honest.”

Muirfield Golf Club in Scotland ditched its men-only membership policy in 2017 after it was taken off the rota for the British Open.

Portmarnock’s men-only membership policy has been in place since the club’s foundation in 1894. It previously hosted the Amateur Championship in 1949, when Max McCready won, while the club has played host to the Irish Open (run by the European Tour) a record 19 times, most recently in 2003.

The membership consultation has commenced in recent weeks, with club Honorary Secretary Eugene Kelly admitted it was “a very sensitive issue for the members” but hoped that the process would be complete “towards the back end of the year.”

Portmarnock and The Island Golf Club in Donabate are jointly hosting the 36-holes qualifying stages of this year’s Amateur Championship - with the champion earning invitations to play in the 148th Open at Royal Portrush and next year’s US Masters, US PGA and US Open championship - before 64 players progress to the matchplay phase which will be completed at Portmarnock. The championship takes place on June 17th-21st with free entry and parking for spectators.

Meanwhile, Leona Maguire’s professional debut in a Major - in the US Women’s Open at the Country Club of Charleston in South Carolina - failed to advance beyond the 36-holes cut after the 24-year-old shot a second round 76 for a midway total of nine-over-par 151.

In stifling heat, Maguire started with six straight pars but a run of five bogeys in eight holes, from the 16th to the fifth, and a failure to manage a single birdie on her card left her languishing outside the cut mark. Maguire’s next taste of a Major will come in the KPMG LPGA Championship in Minnesota later this month.