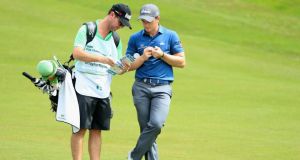 Paul Dunne became the fourth Irish player to qualify for the US Open on Monday. Photograph: Getty Images

Paul Dunne - despite fighting a throat infection - showed his fortitude and resilience to earn a spot in next month’s US Open at Erin Hills in Wisconsin after a long day’s work in the international qualifier at Walton Heath, outside London.

The 24-year-old Greystones golfer earned his ticket to the Major championship after competing in 36-holes of qualifying and then emerging from a seven-man play-off for the final four spots. In all, there were 15 places available at the qualifying tournament.

Dunne had a 4.30am alarm call but shot rounds of 67 and 68 for a 36-hole total of nine-under-par 135, which left him in tied-12th position behind leading qualifier Aaron Ria who finished on 130. However, Dunne and South African Thomas Aiken claimed their exemptions with pars on the second play-off hole.

There is no rest for the Wicklow golfer, who is competing in this week’s European Tour event, the Nordea Masters in Sweden

Ken Early: Klopp adds spice to ‘uninteresting’ Cup replays 06:26
Brian O’Driscoll backs Conor Murray to hold off Cooney challenge 06:00
Dublin and Kerry bring the glamour as Allianz football league returns 06:00
New FAI president wants to bring Brian Kerr back into the fold 06:00
Scotland aiming to go the full Hogg as they look to move on from Japan 06:00
Here is your handy guide to sport on television this week