Tiger Woods has veered from his core values again

Will the salient image of a sporting great, in our minds, now be of that police mugshot? 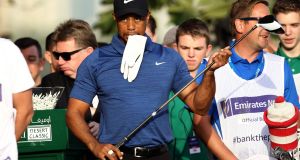 Tiger Woods was booked into the Palm Beach County jail on Monday morning after he was arrested by police in Jupiter, Florida. Photograph: Getty Images

“I stopped living according to my core values. I knew what I was doing was wrong but thought only about myself and thought I could get away with whatever I wanted to. I felt I was entitled. I was wrong and foolish. I don’t get to live life by different rules. The same boundaries that apply to everyone apply to me.” – Tiger Woods. February 19th 2010.

Those words were spoken by a contrite Tiger Woods just over seven years ago, after his marriage infidelities were exposed to the world. His secret life was a secret no more, and Woods – the greatest golfer of his generation and the first $1 billion earner in the sporting world – was penitent, even ashamed, as he spoke words he himself had written.

Are we to have a repeat of those words?

Sadly, and there is no other way to put it, Tiger Woods has –  after being detained for drinking under the influence by police in Jupiter, Florida – fallen from those core values again.

Is it to be that the salient image in our minds will now be of that police mug shot, a photograph of a man staring into the abyss which flew around mainstream and social media, rather than of his iconic punched fist hitting the air in celebration of a holed putt, or lifting one trophy after another?

Lest we forget, Woods was a sporting great. But he is also a reminder of human frailty. As superhuman as he once seemed in annexing the US Open by 15 strokes over his nearest challengers at Pebble Beach in 2000 or in claiming the so-called “Tiger Slam” of holding all four Major championship titles at the one time when winning the 2001 Masters, and as much a person who sought to control his own destiny, there is almost a cry for help in his off-course antics.

His extra-marital affairs. His drinking. His visits to Vegas. His once perfect life unravelled

Is there a connection with the timing of Woods’s arrest for drink driving, in that if coincided with Memorial Day where US veterans are honoured? Tiger’s father, Earl, served in the US army with distinction, and was his son’s greatest influence.

He died in 2006 and it was with his passing that Woods seemed to develop a different life outside of golf. Tiger began an obsession with the US Navy Seals. His extra-marital affairs. His drinking. His visits to Vegas. His once perfect life unravelled.

But the golf course couldn’t offer the solace it might have done, because Woods was – it seemed – constantly injured. Left knee. ACL. MCL. Stress fractures of the tibia. Inflamed facet joint in his neck. Achilles tendon. His back. Time after time, his back. In April, just over a month ago, he underwent his fourth career back surgery.

He is a man who has been in pain for quite some time, and one of the greatest sportsmen who has ever lived – the player who brought multi-million dollar deals to golf through television contracts, who hugely increased the purses at tournaments and the bank balances of his peers, the one who inspired them to be better on the golf course – has made another unforced error.

A player who brought brilliance to golf, who inspired a generation and more of others to hit a golf ball and to take pleasure in the art of driving and chipping and putting and more often than not doing it with a smile on his face, has shown frailty.

What has happened to him is truly sad. Hopefully, he gets help. This is not how Tiger Woods should be remembered.