Out of Bounds: Jon Rahm has No1 ranking within his grasp

Less than two years a pro, he has four wins, two on PGA Tour, two on European Tour 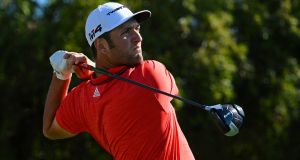 Jon Rahm during the final round of the Waste Management Phoenix Open at TPC Scottsdale. Photograph: Robert Laberge/Getty Images

In conquering the links and everybody else en route to claiming the DDF Irish Open at Portstewart last July, we got a glimpse of what Jon Rahm is all about: power, skill and, on that occasion, not even a sign of his volatile temperament. It was all sweetness and light.

This week, a win in the AT&T Pebble Beach pro-am - where players, celebrities and the rich get to share the fairways - would propel Rahm to world number one, overtaking long-time incumbent Dustin Johnson. It would be quite an achievement if he were to pull it off.

He is a living example of Mr Jekyll and Dr Hyde. There are two Jon Rahms

That Rahm has it within his grasp to become the new world number one is, indeed, a powerful indicator of how the Spaniard -only 23 years old - has impacted the professional game in such a short time: less than two years a pro, he has four career wins, two on the PGA Tour and two on the European Tour, and already an aura of greatness about how he goes about his business.

But he is a living example of Mr Jekyll and Dr Hyde. There are two Jon Rahms.

As we witnessed in last year’s US Open at Erin Hills and again at last week’s Phoenix Open, there is something out of the norm with Senor Rahm. There is another side to him, one where a mistake can see his competitiveness come to the surface. He is liable to explode; and if, for the most part, his anger management allows him to focus on the task at hand, there are other occasions when the club is thrown away or slammed into the ground in fits of pique.

In golf, there is no official sanction in the rule book for such behaviour. No penalty strokes or anything like that. What happens is that the player gets a silent fine and a request not to indulge in such behaviour again.

However, rule 33-7/8 does allow for disqualification for a “serious breach of etiquette,” which is “intentionally distracting another player or intentionally offending someone.” Club throwing in anger doesn’t come into that category.

Anyway, Rahm this week has the opportunity to let his clubs do the talking in a different way; a win would move him to the top of the world rankings, which would constitute a meteoric rise to the summit for the giant Basque, a player who will play a big role in Europe’s quest to regain the Ryder Cup in Paris later this year.

And while Dustin Johnson will partner the legendary ice hockey player Wayne Gretzky - his future father-in-law! - in the team segment of the tournament on the Monterey peninsula, Rahm is liable to be on his best behaviour as he is teamed with David Abeles, the president and CEO of TaylorMade, one of his main sponsors. No club throwing or any of that nonsense on this occasion, we suspect. Not on this occasion at any rate.