Darren Clarke falls to the bottom of leaderboard in Kuala Lumpur 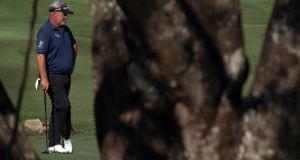 Spain’s Jorge Campillo and South African Dylan Frittelli lead the Maybank Championship after a third round which saw 13 different players holding a share of the lead at some point.

As the rest of the pack fought for supremacy in Kuala Lumpur, Campillo and Fratelli were able to post bogey-free rounds of 66 to reach 15 under.

That gave the pair a one-shot lead over American Berry Henson and India’s Khalin Joshi who both hit 65s.

The leaders both sit 18 shots clear of Darren Clarke, who endured a third round to forget in the Malaysian capital.

Having made a rare and welcome cut Clarke unravelled on Saturday, shooting a seven over par 79 to tumble to the bottom of the leaderboard.

Scotland’s Marc Warren lies tied for fifth with five other players on 13 under after carding 69. His group is also made up of Thailand’s Prayad Marksaeng and Phachara Khongwatmai, Japanese pair Hideto Tanihara and Ryo Ishikawa and Italian Nino Bertasio.

England’s Lee Westwood had been in contention after the second round more than two decades after his first victory at the Saujana Golf & Country Club but dropped down the order after a third-round 70.

He finished the third day as part of an eight-man group tied for 11th on 12 under par which also included Spain’s Pablo Larrazabal.

Liverpool reverse decision to use government furlough scheme 18:55
McLaren boss warns coronavirus impact could threaten Formula One 18:45
New PGA Tour schedule could bring an end to the year like no other 18:42
Jones says new players will form 60 per cent of England’s next World Cup squad 18:30
Travel restrictions could hit Ireland hard when racing returns 17:34
Here is your handy guide to sport on television this week