“The funding is essential for amateur high performance programmes” 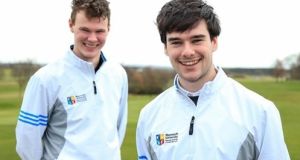 Minister of State for Tourism and Sport, Brendan Griffin TD last week announced that golf will benefit from Sport Ireland funding of €758,000 in 2018 and this has been welcomed by both Sinead Heraty and Pat Finn, CEOs of the ILGU and GUI respectively.

Speaking after the announcement, Finn said: “The support from Sport Ireland for our High Performance golfers, the development of the game at grass roots level and our staging of the World Amateur Team Championships this year is very welcome.

“The support in particular for the Confederation of Golf in Ireland which is tasked with developing the game and providing services to affiliated golf clubs is significant.

“This coupled with the substantial increase in funding for golf clubs in the recent Sports Capital Programme is a real boost for the sport. Our affiliated golf clubs bring people together from all walks of life, and we want to continue to empower clubs to make a positive impact on their communities.”

Heraty added: “The ILGU very much appreciate the strong ongoing support for golf from Sport Ireland. The funding is essential for amateur high performance programmes.

“With the ongoing support of Sport Ireland and Sport NI we can continue to produce world-class golfers who will represent Ireland at the highest level of the game.

As part of the Sport Ireland announcement, funding was confirmed for the World Amateur Team Championships that take place in August and September at Carton House, Maynooth and which the GUI and ILGU are jointly staging.

The funding breakdown for golf in 2018 is:

The first tournament of its kind for amateur golfers in Ireland, the Maynooth University duo took first prize thanks to a top score of 15 gross stableford points over the final six holes. And the new-look competition met with warm support from the players.

“It was really enjoyable,” said DCU’s Elisa Corcoran. “It’s cool, I’d like to do it again in the future.” Corcoran partnered Cathal Gallagher, finishing third overall.

“I enjoyed it because there’s pressure from the first tee,” said Gallagher. “In a normal match, if you’re all square with six to play you’re kind of nervous so you feel like every shot is important.”

ILGU squad for French under-21 championship

The event, which consists of two rounds of strokeplay qualifying followed by five rounds of matchplay, is played annually at Saint Cloud Golf Club on the outskirts of Paris.

Not since 2009, when a 15-year-old Leona Maguire claimed victory, has an Irish player clinched the Esmond Trophy (U21). However, Wilson, who has begun her 2018 season with two top 15 finishes, secured the Cartier Trophy as best U18 player in 2017 and will hope to go one step further this year.

Awarded to the leading women’s golfer in the World Amateur Golf Ranking, the Co Cavan star (23) was presented with her award by Mike Davis, Executive Director and CEO of the USGA at halftime at Duke’s Cameron Indoor Stadium in Durham, North Carolina.

Leona won the individual title that week in a season that also brought her the Ladies British Open Amateur Championship. While she finished joint runner-up in the 2017 NCAA Championship individual standings, her great regret was not winning the NCAA team title with Duke and she hopes to put that right in her final collegiate season.

“My goal is to win a National Championship with my team,” she said.

Gillian Burrell, the 55-year-old, born in Athy, Co Kildare succeeds Joe Frawley to become the first woman to hold the post. A keen sportswoman in her youth, Burrell, who was recently awarded the status of Advanced Fellow professional, played her amateur golf at Athy GC and Royal Curragh GC going on to represent Ireland as a junior.

“I had ambitions to be a golf professional from early on and always wanted to be a coach,” said Gillian. “The performance aspect of the game was also important to me. I was very lucky to be around at the same time as Mary McKenna, Lillian Behan and Isabella Robertson. I spent a lot of time with those elite players and I guess I was curious about what made a winner.”

Currently based at Carr Golf Centre at Spawell, Burrell began her career as an assistant working for Ciaran Monaghan at the same venue some 27 years ago. She progressed to Newlands GC with Paul Heeney and went with him when he moved to Charlesland GC.

Having finished her apprenticeship with Heeney, Burrell worked at a driving range for a number of years later moving to Stepaside Driving Range in 2000 and then around 2012 she returned to Spawell, partnering with Carr Golf.

Burrell’s professional career includes spells as Training Consultant with Junior Golf Ireland, Special Olympics Ireland and CGI. She also spent several years working with the ILGU as Leinster Coach. Currently working as a PGA coach and coach educator, she insists that it is still a challenging business environment for PGA professionals.

Playing off two, and a member of Dun Laoghaire’s winning side in the Leinster section of the Irish Junior Foursomes last year, Keyes made two birdies and two bogeys to turn in level par. He then came home in 38 to win the nett with a one-over 72, edging out Castle’s Eoghan McKeever and Royal Tara’s Sean Whelan by a shot.

Despite shooting an excellent, level par 71, Elm Park’s Charlie Denvir was left to rue bogeys at the 17th and 18th as he finished a shot behind McDermott in the gross. Out in 36 with one birdie and one bogey on his card, the Connacht Under 18 Boys champion eagled the 15th to get to two-under before those late mistakes.

Former West of Ireland champion McDermott went out in 37 with eight pars and a solitary bogey at the fourth on his card. But he came back in 33 following a bogey at the 10th with birdies at the 11th, 12th and 15th to beat Denvir by one and top the 74-strong field in a steady breeze.

Halpenny Golf’s Steven Quinlan took the third gross prize with a 72, coming back from three-over-par after just three holes.

Juli Inkster will captain Team USA for the third successive time as next year’s Solheim Cup at Gleneagles. Inkster has led her team to back-to-back wins in the last two contests, and the American legend has accepted the role once again as she bids to retain the trophy against Catriona Matthew’s side in September, 2019.

The 57-year-old, who also featured in five winning teams in her nine appearances as a player, becomes the first three-time captain for Team USA since the competition was launched in 1990, and she is looking forward to taking on the responsibility.

Inkster said: “This is an unbelievable honour and one I do not take lightly. I’m so stoked to be able to take the US Team to Scotland, the home of golf, to compete in the 2019 Solheim Cup. We can’t wait to get started.”