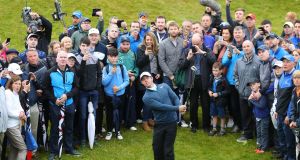 Rory McIlroy’s hosting of the Dubai Duty Free Irish Open won’t be a one-man task any longer, with the PGA European Tour revealing that the tournament – which has been revitalised by the four-time Major champion’s hands-on connection – will have his fellow-Irish Major champions Pádraig Harrington, Darren Clarke and Graeme McDowell and past Ryder Cup captain Paul McGinley taking turns to play host in the future.

McIlroy, who first assumed responsibility as tournament host at Royal County Down in 2015, and played that role at The K Club in 2016 and Portstewart last year, will again do so at Ballyliffin in July, with McGinley assuming the hosting responsibility for the 2019 tournament at a venue yet to be decided. A decision has also yet to be taken on the order of the rotation.

The new approach is similar to the model adopted by English players Justin Rose, Ian Poulter, Luke Donald and Lee Westwood in taking turns to host the British Masters. In effect, it means the load can be shared.

“I am thrilled by what we have achieved with the Dubai Duty Free Irish Open over the past four years. I would like to thank the European Tour for sharing my vision for the event. Now feels like the right time to rotate the tournament hosting process,” said McIlroy.

In his time as host McIlroy succeeded in bringing Dubai Duty Free on board as title sponsor, and the tournament was elevated to one of the select events which form part of the Rolex Series on the European Tour, with prize money set at a minimum $7 million.

The idea to rotate the hosting duties has been embraced by the players involved. As Paul McGinley put it: “I’m delighted to be part of this next exciting phase...as Ireland moves to the forefront of the world golf schedule [with the British Open to be staged at Royal Portrush in 2019], I look forward to hosting that year’s Irish Open and will endeavour to make it a memorable event.”

To a man the players have embraced the concept.

“I think it’s great that we have Rory, Graeme and myself from Northern Ireland and then Paul and Pádraig from the South. There will be a natural rotation of the tournament around Ireland, and I’m sure there will be a fair bit of competition between the lads to see who can put on the biggest and best tournament when we are the tournament host!” said Clarke.

McDowell claimed it was an “honour” to be one of the future hosts, adding: “I am sure we will have our own ideas how to keep growing the Irish Open and giving Irish golf fans a tournament to be proud of.”

Harrington said: “The Irish Open has been an important part of my schedule my whole career, and I have always enjoyed playing an active role in helping to make sure it is a success and one of the leading events on the European Tour.”

The move towards the multi-host model going forward has been given the seal of approval from title sponsors Dubai Duty Free.

As it happens McIlroy will have the opportunity to discuss what is involved with Harrington and McDowell when they meet at this week’s tour stop, the AT&T Pebble Beach pro-am tournament on the Monterey peninsula.

The trio are part of a six-strong Irish contingent in the field, joined by Séamus Power, Shane Lowry and Paul Dunne, who is playing on a sponsors’ invitation.

It will be McIlroy’s first tournament stateside since he returned to tournament play having finished third on his reappearance in Abu Dhabi and then runner-up in the Dubai Desert Classic.

1 Andy Farrell ticking all the boxes in advance of England showdown
2 Players impressed with Bono’s Irish pride and desire
3 Ireland wary of Peyper calling the tune as they head for Twickenham
4 David Brady says he has witnessed the illegal payments of GAA managers
5 Owen Doyle: Day of the jackal may be coming to an end
Real news has value SUBSCRIBE