Out of Bounds: European Tour hopefuls set for an Irish Challenge 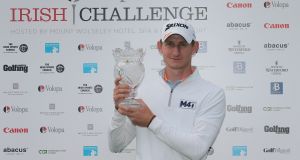 The issue of scheduling doesn’t just apply to players who hold cards on the main tours, be they the PGA European Tour or the PGA Tour in the United States.

As is demonstrated by this week’s Irish Challenge Tour event at Mount Wolseley clashing with the Clipper Logistics tournament at Blackmoor in England on the third level EuroPro Tour, those players competing at the lower tiers of tour golf can also be caught between a rock and a hard place.

Although the Irish Challenge is the bigger tournament - more money, more world-ranking points, greater career progression for the winner etc - a number of Irish players with aspirations to earn full tour cards have had to take the bigger picture view. It has meant players like Jonny Caldwell, Dermot McElroy and Niall Kearney have chosen to play the what is the penultimate event of the EuroPro Tour season rather than take up spots at Mount Wolseley.

Their reasoning, though, is understandable because the top-five players on the EuroPro Tour are guaranteed full Challenge Tour cards for next season. As it stands, Caldwell is fourth in the EuroPro rankings, McElroy is sixth and Kearney is 10th. All three are within touching distance, with the final tournament of the third tier development circuit - the Tour Championship at Amendoeira in Portugal next month - confined to just the leading 60 players.

Yet, there are potentially even greater gains on offer at the Irish Challenge for those other Irish players with tour ambitions: with the season working its way towards a conclusion, this tournament at Mount Wolseley effectively launches the kick for home whereby the leading 15 players on the end-of-season rankings will earn full European Tour cards for 2018.

Indeed, the final stretch of tournaments is lucrative. Only two of them, the Irish Challenge and the Spanish Challenge, will actually be held in Europe. The other five wind through Asia - including big money events in Kazakhstan next week and Hainan Island and Foshan in China next month - before finishing with the Grand Final in Oman, the culmination of the Road to Oman where only the top-45 on the moneylist get to tee up the ball.

The Challenge Tour has proven to be a remarkably successful stepping stone for players to greater things. Henrik Stenson, Martin Kaymer, Thomas Bjorn and Justin Rose are among those who took that formative tour. Rather bizarrely, though, it has not shown to be so successful through the years for Irish players: Raymond Burns trailed a blaze, but that was back in the mid-1990s, and Michael Hoey was a multiple winner, moving between the secondary circuit and the main show.

This week’s Irish Challenge at Mount Wolseley provides an opportunity for career-changing pathways for players, among them the 23 Irishmen in the field ranging from those with serious intent on securing full tour cards to fledgling pros (among them Conor O’Rourke and Kevin LeBlanc), club pros and amateurs. The full mix, in effect.

Currently no Irish player is inside the magical top-15 who will earn full PGA European Tour cards when they are dispensed in Oman. Gavin Moynihan, who is 27th, is best placed to make a push and the likes of Ruaidhri McGee (76th) and Cormac Sharvin (97th) need something big to happen if they are to force their way into the mix.

This is not the Irish Open. It is a far cry from the Majors. But for the 23 Irish players in the field at Mount Wolseley, for this week, this is as big as it gets . . . . and an opportunity for a career-changing trajectory.