McIlroy elevates Irish Open back to an elite level 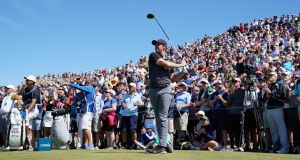 The only time Rory McIlroy seemed irked at all in the run-up to the DDF Irish Open at Ballyliffin was when he was asked about the depth of quality in the field. It was pointed out that only five other players from the world’s top 50 were playing, the implication being that he – as host – must have been disappointed at how few of the world’s elite had travelled.

McIlroy wasn’t too impressed with the leading nature of the question and, quite rightly, pointed out a number of valid reasons why the field was what it was: the Fourth of July holiday in the States was clearly a factor in deterring many Americans playing, while neither was he going to “twist anyone’s arm” to play.

The fact of the matter is that the Irish Open was the biggest tournament in the world last week and that will be the case again when it is staged in Lahinch next year.

Indeed, a number of factors will contribute to making it likely that next year’s Irish Open – which will be hosted by Paul McGinley – will have an even stronger field.

Firstly, The 148th Open will be staged at Royal Portrush two weeks later. McGinley – as we know from his Ryder Cup captaincy – is a wise old fox and it doesn’t come as any surprise that he has already being in touch with the R&A so that he can mirror the set-up at Lahinch as it will be at Portrush. By doing so, he is hopeful it will act as an inducement for players to prepare with a scorecard in their hands on similar course conditions. Its proximity to the Major should help bolster the Irish Open field.

Secondly, this year’s French Open attracted a large number of the elite European Tour players due to the fact that it will play host to the Ryder Cup in September. Nobody can argue with those players who pencilled the Paris tournament into their schedules but that situation won’t arise next year.

Thirdly, the opposing tournament on the PGA Tour next year is a new event: the 3M Open in Minneapolis – in the Mid-West – is unlikely to have the same pulling power.

What is beyond doubt is that McIlroy has handed over the Irish Open to McGinley in much better shape than it was in when he took over the reins four years ago. From a point where it had slipped to a mid-tier tournament on the PGA European Tour, the Irish Open – under McIlroy’s watch – has moved back to an elite event. The prize money has tripled in that time, it is a Rolex Series fixture; and the amount of money raised for various charities, in the millions, should be appreciated.

McGinley will bring his own ideas to the party in Lahinch; the upward trending will continue!