Out of Bounds: Paris to provide one of best Ryder Cup finishes ever

‘There can be no prestige without mystery, for familiarity breeds contempt . . .’ 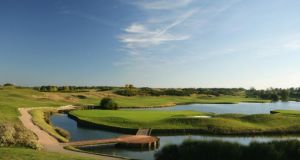 A view from behind the green on the 450 metre, par 5, 18th hole in Paris. Photograph: David Cannon/Getty Images

Aesop started it, Charles de Gaulle expanded on it.

Neither of them had the golf course that is Paris National in mind, but this week’s tour stop for the French Open is one of the most familiar on tour for players: since it was first staged there in 1991, the venue - with just two exceptions, in 1999 and 2001 - has been home to a tournament that is nowadays part of the European Tour’s megabucks Rolex Series.

Come September, it will also play host to the Ryder Cup. And, given the amount of time and money put into the French Open through the years, the land outside Paris, which in its early development invited builders to dump its rubble as bedrock, has transformed into a stadium course that will accommodate in excess of 60,000 spectators a day during the match.

My own journey there to play the course recently started with a Brittany Ferries departure out of Cork harbour to Roscoff and onwards by road to Versailles, where the course, not the palace, was the magnet. And all the way, if I’m honest, it was one hole which was on my mind: the 18th!

Let me explain. For all the familiarity that tour players have with the 18th hole, one of a finishing stretch of four tough holes that can make or break a round, it is the final hole that is the toughest of all. Some players might even approach it with contempt, for it has always been known to take its share of prisoners.

Indeed, in last year’s French Open, the Par 4 18th - with water down the left off the tee, pot bunkers and heavy rough among the hills down the right, and yet more water guarding the green and around it - recorded 147 bogeys or worse through the tournament. It is a hole that has ruined many a scorecard through all those years of the French Open . . . and, in three months time, will provide a spectacular finishing hole for the Ryder Cup. One of the best, ever!

The Ryder Cup is a big deal for France. Indeed, one of the legacies of France getting the biennial match will be the construction of 100 short courses to encourage newcomers to the sport; of that promise made in the bidding process, no fewer than 93 courses are already open.

Indeed, golf in France - although very much in the shadow of football in terms of participation - has 420,000 registered club players which grows to over 650,000 when casual players are included. One surprising discovery was that there are over 750 18-hole courses, more than the number in Spain and Portugal combined.

And the Albatros course at Le Golf National - as it has done in every French Open, and will again this week - is the jewel in the crown, one built on rubble brought from numerous construction sites around the Paris area to make for a stadium course that can cater for massive crowds but also provide a tough challenge for players. It will also play host to the golf tournament in the 2024 Olympics.

This week’s French Open has attracted a large number of players intent on making the Ryder Cup, most of them those with aspirations to be part of Thomas Bjorn’s team. Only one - Justin Thomas - from the American entries will likely be back again in September as part of Jim Furyk’s team.

Paul Armitage, the director of golf at Paris National, isn’t surprised that so few Americans made a point of making an advance competitive visit:. “We don’t pay any appearance money, never have done, never will,” before adding another possible reason for such absences. “Would you want to come and shoot 77 and miss the cut three months before the Ryder Cup?”

Perhaps they’re right to keep it as a mystery, until the Ryder Cup.

PS: My play of the 18th proved to be memorable for all the wrong reasons. Let’s just say the rough and the water did its thing in adding another victim.

PPS: Brittany Ferries is an approved operator of Ryder Cup Travel Services. For the event itself, it is offering a programme that includes a five-day official Ryder Cup package.