Out of Bounds: The US player hit a moving ball on the 13th but was not disqualified 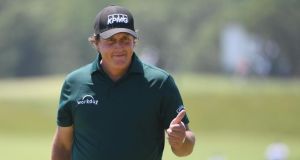 Phil Mickelson: he intentionally hit a moving ball to prevent it from running off the green. Photograph: Ross Kinnaird/Getty Images

Let’s face it, the rules of golf are a minefield through which you have to thread very carefully, and at this stage of the game you’d have thought that every feasible situation would be covered. Phil Mickelson’s antics at the US Open have shown us how wrong we’d be for thinking like that.

Mickelson’s decision to intentionally hit a moving ball (back towards the hole) to prevent it running off the green was something that was never considered by the rulemakers – the R&A and the USGA – in their five-year rules’ review which took place from 2012 to 2017.

Those new rules are due to come into force on January 1st, 2019, among which are changes for dropping balls when taking relief (from knee height rather than shoulder height) and removing the penalty stroke for an accidental double-hit when playing a shot.

The whole reasoning behind the changes was to simplify the rulebook and make golf more accessible for newcomers to the sport.

What Phil did, though, was never contemplated.

Indeed, the very thought that a player – especially one on tour, especially one in a Major and especially one with Mickelson’s profile in the sport – would do what he did was unimaginable. It beggared belief, to be honest.

Did the punishment (a two-stroke penalty) fit the crime?

Perhaps not, because a disqualification – under Rule 1-2 which covers a situation in which a player has “intent to influence the movement of a ball in play” to gain a significant advantage – wasn’t considered in Phil’s case. Instead the USGA opting to use 14-5, a rule that covers making a stroke at a moving ball.

The upshot is that Phil’s intentional actions showed up a grey area in the rulebook, and, with growing the game such a part of what the R&A and the USGA are about these days, Mickelson’s act verged on bringing the game into disrepute.

In the last few years the governing bodies have moved to change rules after it was perceived that players were unfairly treated by the existing ones: there was the case of Pádraig Harrington being disqualified in Abu Dhabi (in 2011) for signing for an incorrect scorecard after a television viewer phoned in highlighting that his ball had moved. Harrington, unaware of the violation, signed his card and was later disqualified. The rule was changed so that a two-stroke penalty would apply rather than disqualification. It became known as the “Harrington Rule”.

Then there is the Lexi Rule. It was introduced after a television viewer again phoned in after Lexi Thompson replaced her ball in the wrong spot after marking it on the green during the ANA Inspiration. The subsequent rule change cut out the practice of armchair referees having any influence. Instead a rule official now monitors telecasts for any infringements.

Phil got away with a two-stroke penalty, but the greater legacy of his actions is likely to be a review and the introduction of a new rule which will have disqualification at its core for any player who intentionally hits a moving ball.

Ibrahimovic and Lukaku clash as Internazionale nab Milan derby 07:52
Man City go top of Premier League; Gordon D’Arcy on Ireland’s Six Nations hopes 07:39
Seán Moran: When GAA players were shyer about being the retiring type 06:00
Gordon D’Arcy: It is hard to be excited for a sanitised Six Nations 06:37
Contract future still unclear for many of Ireland’s rugby pros 01:00
Here is your handy guide to sport on television this week