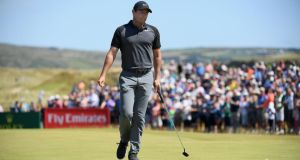 Rory McIlroy reacts to a missed putt making bogey on the ninth green during the second round of the Dubai Duty Free Irish Open at Ballyliffin Golf Club. Photo: Ross Kinnaird/Getty Images

Rory McIlroy’s putting problems had the four-time Major winner talking to himself as he suffered a disappointing second round in the €6million Dubai Duty Free Irish Open.

McIlroy, who won this title in 2016 but has missed the cut in four of the last five years, struggled on the greens at Ballyliffin for the second day in succession as he carded three birdies and four bogeys, three of which came in his last five holes.

The resulting 73 left tournament host McIlroy on one under par and seven shots off the clubhouse lead held by New Zealand’s Ryan Fox, the son of former All Black fly-half Grant Fox.

“The game felt okay but I didn’t hole anything again on the greens,” McIlroy said. “I hit my best putt of the day on the 18th [his ninth hole] and it came back to me with a horseshoe. It sums up the last couple of days; even the good ones are not going in.

“It tested my patience and I was mumbling to myself walking from the 18th green to the first tee, but I will keep plugging away and at least I get to play the next two days. It’s a success in terms of the last few years.

“All I can do is keep giving myself those chances and not get too frustrated. If I can keep knocking on the door, hopefully sooner or later it will turn around.”

Although the dry conditions mean the course is playing shorter than its full length of 7,462 yards, McIlroy admits it will be tough to play aggressively and mount a charge up the leaderboard.

“If you start to take too much on off the tee and leave yourself shorter irons in, you bring more of the bunkers into play and the rough into play more and it’s just not worth it I think,” the former world number one said.

“So it’s just a matter of being patient, hitting fairways, hitting greens, giving yourself chances and if you can get a few to drop early on, then hopefully you get a bit of momentum from that.

“The crowds are fantastic. The weather is obviously great and that’s brought a lot of people out. It’s a great atmosphere out there. It’s enjoyable to play in front of them and hopefully I can give them something to cheer about over the last couple of days.”