Out of Bounds: When is a gimmick not a gimmick?

It’s about time slow play was tackled, but are gender games just a marketing opportunity? 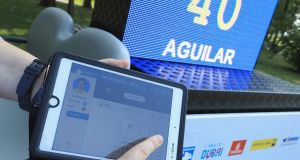 A referee tests the ‘Shot Clock’ system during the Pro-Am of the 2018 Shot Clock Masters at Diamond Country Club in Atzenbrugg, Austria. Photograph: Matthew Lewis/Getty Images

When is a gimmick not a gimmick? When, in fact, does it become a valued marketing tool? At a time of the season when golf is entering the more serious stretch of tournaments, with Majors in both men’s and women’s a month-on-month happening, the need to think outside the box away from such pressurised environments has become obvious.

Last week, Laura Davies competed against the men in the Shipco Masters in Denmark on the Staysure Tour (the European seniors circuit) and, next month, Brittany Lincicome will play on a sponsor’s exemption in the Barbasol Championship on the PGA Tour (an event which runs against The Open at Carnoustie).

Such gender games have been around in the past - Annika Sorenstam, Michielle Wie are among those to have played in men’s professional tournaments - and, in the case of Lincicome, it is a case of doing the bidding of one of her main sponsor’s for what is really a marketing opportunity. Even if she fails to survive the cut, she will have won because of the attention her mere presence will bring to the event.

So, what of the Golf Shot Masters which takes place on the PGA European Tour in Vienna? Gimmick? Marketing tool? Or something a bit more serious than that?

Slow play on tour is something that has been an issue for a long, long time; and watching the final group of the Memorial tournament in the final round take five and a half hours to play was, in its own way, appropriate timing in reminding us that it remains painful viewing.

Which makes what is happening in Austria on the European Tour more than a gimmick, because slow play is a serious matter . . . and it is about time something was done about it!

It is not as if the European Tour are bending the rule book or even making new rules; all that is happening is that they are actually enforcing the rules that exist, and doing so in a high-profile way with large clocks on buggies accompanying every group with a countdown on the time limit to ensure players hit their shots within the time allowed.

Should we read anything into the weak field that has made its way to Diamond Country Club in Atzenbrugg near Vienna?

Well, it is being staged the week before the US Open and comes immediately after back-to-back Rolex Series tournaments; so, when players were mapping out their itineraries, it was positioned in an unfavourable slot in the calendar. Still, you can be sure that some of the slower players on tour have also bypassed the tournament for the simple reason that time will be of the essence and penalties will be dished out as frequently as Wiener Schnitzel.

The Shot Clock Masters - a gimmicky name if ever there was one - may not cure all the ills of slow play, but at least it is an effort to combat it. Baby steps are better than taking no steps at all.