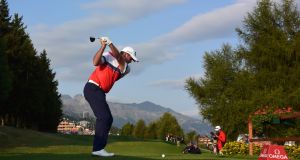 Australia’s Scott Hend in action during the second round of the Omega European Masters at Crans-sur-Sierre Golf Club in Crans-Montana, Switzerland. Photograph: Stuart Franklin/Getty Images

Australia’s Scott Hend is in pole position to go one better than last year after taking the halfway lead in the Omega European Masters.

Hend, who lost a playoff to Sweden’s Alex Noren at Crans-sur-Sierre 12 months ago, carded an eagle and five birdies in a second round of 63 to finish 13 under par, a shot ahead of South Africa’s Darren Fichardt.

“It would be nice to putt a little bit better but when you walk off with 63 it’s fantastic,” Hend, whose children and their nanny are set to evacuate their Florida home to avoid the possible landfall of Hurricane Irma, told Sky Sports.

“I feel like I’ve been playing really well for the last four months and really wanted to get in the Presidents Cup team.

“I didn’t quite make it there which was a bit of a disappointment and I feel like I have a point to prove to myself that I’m good enough to mix it with those boys.”

Fichardt recorded four birdies and an eagle in a 64 which left him three strokes ahead of Thongchai Jaidee, Todd Sinnott and Fabrizio Zanotti, with England’s Matthew Fitzpatrick alongside Ryan Fox and Julian Suri on eight under following a 65.

Lee Slattery, who watched his wife Faye give birth to the couple’s second child Penelope via FaceTime earlier this week, improved 13 shots on his opening 75 with a brilliant 62 to finish three under.

“I don’t know what happened,” said Slattery, who was runner-up in the Czech Masters on Sunday. “Someone’s not letting me go home to see my little daughter, it’s quite incredible.

“I just got off to a great start this morning and momentum in golf is the most important thing. Five under through six and although I was a bit tired this morning, the adrenalin started running and I just felt like I could shoot anything after that. It was brilliant.”

Defending champion Alex Noren was alongside Slattery on three under after a 67, while the same score ensured Lee Westwood made the halfway cut in his 500th European Tour start on two under.

Ireland’s Paul Dunne made the cut right on the mark after a one-over 71 dropped him back to level par for the tournament.