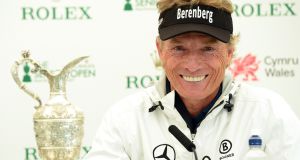 Mark McNulty took the positives after shooting two under-par rounds to finish the Senior Open Championship strongly at Royal Porthcawl – but it was very much a case of “what if” for the 16-time European Tour winner.

Having battled through the inclement weather that battered the south Wales coast over the first two days to just sneak inside the cut on 13 over par, the 63-year-old then produced his best round in better conditions on Saturday with a four-under-par 67.

He rounded off his tournament with a 70 yesterday, which left him in 30th place on a 72-hole aggregate of 292 – eight over par – and 12 strokes back on winner Bernhard Langer, who won with a four-under-par score of 280.

It saw the German master, who turns 60 next month, win his third Senior Open title by three strokes from fellow former Ryder Cup captain Corey Pavin, and they were the only two players to finish a testing tournament under par.

It was also Langer’s third Senior Major win in 2017 and a record-setting 10th overall.

Meanwhile for McNulty, having opened with a 75, he ultimately left to rue his second round 80 on Friday that realistically ended any chances of mounting a serious challenge for the senior Claret Jug.

“I shot myself in the foot in the second round where I was nine-over par,” he said. “To finish eight over par and you look at the scoreboard now, it’s ‘if and buts’ in golf, as we all know.

“This is a great golf course and a good test of golf, which becomes a bit of a crazy place when the weather is tough. It’s fair to say it would’ve been nice to have had four decent days with the weather, but obviously shooting two under-par rounds over these last two days has been great.”

For Langer, it was his second victory in four years at Royal Porthcawl having also won by a record 13-stroke margin when the tournament was last staged there back in 2014.

Guardiola insists Man City’s success mainly down to players, not his coaching 22:30
How Thomas Tuchel hit the ground running and got Chelsea back on track 22:30
Top-four finish would be a big achievement for Liverpool, admits Klopp 22:30
Ulster see off Ospreys but miss out on a bonus point 22:25
Joey Carbery’s cameo seals Munster win over Cardiff 22:16
Here is your handy guide to sport on television this week