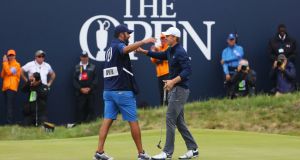 Jordan Spieth or Rory McIlroy? Now we have a race and now we have the makings of a rivalry to compare with Jack and Arnold, or Tiger and Phil.

For, in securing a third different Major title before he even reaches the age of 24 – that will happen on Thursday! – Spieth will head to the US PGA Championship at Quail Hollow in North Carolina next month with the chance to become the sixth player to achieve the career Grand Slam.

Of the current generation of players, three have one piece of the Grand Slam jigsaw missing. In Phil Mickelson’s case, it is the US Open; in McIlroy’s, it is the US Masters, and in Spieth’s it is that PGA.

Spieth has moved to the front of the queue, especially given that the PGA is next up, although Pádraig Harrington – who completed the British Open/US PGA double in 2008 – is of the opinion that Spieth isn’t in any rush to complete what he believes is an inevitability.

“I do think Jordan can go on and win a fourth . . . . but it doesn’t have to happen in two weeks’ time, he can take his time. It will happen over time. The less he pressurises himself to win that one, it will happen,” said Harrington, adding; “He is something special, there’s something about him, he has that X-Factor you can’t quite quantify.”

Spieth, who moved from three to two in the latest world rankings and closed the gap on Dustin Johnson to a 2.52 points average, joined Jack Nicklaus as the only player to win three different Major championship as a 23-year-old.

Of being within touching distance of the Grand Slam, Spieth was careful with his words. Humility, not arrogance, is his true calling card.

“It’s amazing. I feel blessed to be able to play the game I love . . . . to be in that company, no doubt about it, is absolutely incredible. And I certainly appreciate it. And we work really hard with that being the goal . . . . but there is a long way to go.”

In fact, it may not be that far to go at all. Spieth has already clocked up one runner-up finish in the PGA – finishing behind Jason Day at Whistling Strait in 2015 – and heads to Quail Hollow with renewed fortitude for the manner in which finished the deal at Royal Birkdale.

There were two critical points in the round, both of which had his caddie Michael Greller involved as if to underline the team element behind Spieth’s victory. The first input from Greller came on the seventh tee of the final round as Spieth’s game was unravelling after three early bogeys had wiped out his advantage.

“Do you remember that group you were with in Cabo last week?” asked Greller in reference to time the golfer had spent with Olympic swimmer Michael Phelps and basketball legend Michael Jordan.

“You belong in that group, you’re that calibre of athlete. But I need you to believe that right now.”

The second input from Greller came during the mayhem of assessing what to do after Spieth’s wild drive into heavy rough on the 13th, where he correctly persuaded his man of the yardage from the drop on the practice ground to the green, an angle which nobody could conceivably have covered in any pre-championship preparatory work.

“I guess that’s the stuff legends are made of. When you’re pushed back to the wall and you’re in a corner and you keep punching, that just shows his tenacity and resilience and the heart that he has,” said Spieth’s coach Cameron McCormick, adding: “And Michael [Greller] as well. They work so well as a team . . . . perhaps the blessing was what happened on 13. It was such a shock, but it was a good system restart, a reboot.”

Wouldn’t it be ironic if McIlroy, though, was the man to thwart Spieth in his bid to beat him to the Grand Slam punch?

McIlroy returns to action in next week’s WGC-Bridgestone Invitational at Akron – where he is a past winner and guaranteed four rounds as there is no cut – before heading to the PGA at Quail Hollow, a tournament he has twice won and also finished runner-up in on another occasion.

“I feel like with the way my game is, I’ll definitely have a great chance at Akron and the PGA,” said McIlroy.

Shane Lowry, Graeme McDowell and Séamus Power are all in action in the Canadian Open at Glen Abbey this week where there are different objectives on the table.

Power, for his part, is 140th in the latest FedEx Cup rankings and needs to move into the top 125 to retain his tour card.