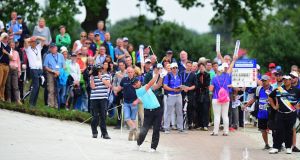 England’s Jordan Smith plays his second shot from a bunker on the sixth hole during the third round of the the Porsche European Open at Green Eagle Golf Course in Hamburg. Photograph: Tony Marshall/Getty Images

England’s Jordan Smith could not hide his excitement ahead of taking a two-shot lead into the final round of the Porsche European Open in Germany.

The 2014 Walker Cup player from Bath shot a third round 67 in Hamburg to boost his chances of a first European Tour victory.

“I’m over the moon, I played lovely from tee to green and putted really nicely,” Smith said.

“Obviously it’s long and thankfully they’ve put the tees forward because it’s playing soft, so it’s just planning your route around the course and taking advantage of the par fives where you can.

“I’m very excited. It’s been a while since I’ve been in the final group so I’m looking forward to it.”

Smith’s five birdies took him to 12 under par and two clear of defending champion Alex Levy and Swede Jens Fahrbring.

Overnight leader Ashley Chesters led for much of the day, but missed several key putts on the back nine to finish with a one-over 72.

Chesters held a one-shot lead when the weather-affected second round was completed on Saturday morning and converted from inside five feet on the first hole of his third round to get to double figures.

The 27-year-old two-time European Amateur champion dropped his first shot of the week at the next when he left a chip from off the green eight feet short.

But he got the shot back at the third and back-to-back gains at the seventh and eighth – the latter after hitting his tee shot to within a foot – briefly sent him three clear.

However, bogeys at the ninth, 16th and 18th checked his progress, and Smith took full advantage.

Smith took the lead for the first time on the 15th and a superb iron to the final green set up a simple two-putt birdie.

Home favourite Marcel Siem marked his his 400th European Tour appearance with an ace on the 17th to win one of the tournament sponsor’s cars.

The German holed his seven-iron to the 170-yard penultimate hole, the ball flying straight into the cup off the flagstick.

As well as the boost to his scorecard – Siem shot a 73 to lie three under par – the 37-year-old also won a Porsche Panamera Turbo Sport Turismo worth €158,604.

The Island golfer came back to the course at first light to complete the final five holes, making a birdie two on the short 17th before a seven at the final hole left him signing for a level-par 72 to remain on two under.

It meant that McBride would play the final two rounds at the only Irish golfer to make the cut, with Paul Dunne missing out by one shot and Chris Selfridge back on four over.