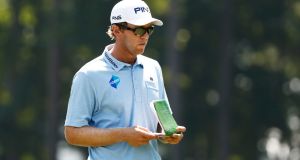 Seamus Power has been in fine form at the Canadian Open. Photograph: Getty Images

Shane Lowry failed to make the cut at the RBC Canadian Open on Friday, where his first dropped shots of the competition were a costly double bogey.

Teeing off for his second round on the back nine, the Offalyman was two under par after his first nine holes and -5 overall.With birdies arriving on the par-3 12th and par-5 16th, Lowry was in a solid position before a double bogey on the sixth, followed by a bogey on the eighth.

Following his missed cut at the British Open Championship last weekend, and his drop to a world ranking of 79, Lowry was hoping for a return to form in Glen Abbey Golf Course in Oakville, Ontario. However he finished two shots outside the -4 weekend cut.

The Waterford native hit six birdies on Thursday to sit just three shots behind the leaders, and followed that up on Friday with four more to leave him six shots behind clubhouse leader Martin Flores.

Power opened up with a birdie on the first, with three more arriving on the 11th, 12th and 16th holes. With bogeys on the eighth and 14th halting his progress ahead of the weekend.

Former world number one and 2004 champion Vijay Singh rolled back the years to sit two shots back of the second round lead while British Open runner-up Matt Kuchar battled late to make the cut.

Seeking to become the oldest winner in PGA Tour history, the 54-year-old Fijian mixed six birdies with two bogeys in his round of 68, where Flores led a trio of fellow Americans by one stroke.

Singh, a 34-times winner on the PGA Tour who has not triumphed since 2008, is off to his best tournament start all season after opening with a 66.

“Doing everything good ... this is a golf course where if you are on the fairway you can attack the pins,” said Singh, who could have competed in this week’s Senior British Open. “I practised my putting pretty good last week so it’s working out.”

If Singh can clinch victory on Sunday, he would become the oldest winner in PGA Tour history, eclipsing the record held by Sam Snead, who won the 1965 Greater Greensboro Open at the age of 52 years, 10 months and eight days.

Flores was a model of consistency, firing a second successive 66 in a bogey-free round which boasted an eagle on the par-five second and three consecutive birdies from the 16th to the 18th.

American Gary Woodland soared up the leaderboard with a 10-birdie round of 63, the day’s lowest, to vault into second alongside compatriots Matt Every (68) and Brandon Hagy (68).

Having started two strokes adrift, world number one Dustin Johnson shot a 69 to lie four off the pace.

Kuchar (68), who battled dizzy spells in the first round, did well to offset a back-nine double-bogey with an eagle at the par-five 13th but still needed some magic to stick around for the weekend.

The 39-year-old American caught fire with birdies at the final three holes to reach a five-under total of 139, one shot inside the cut-line.

After opening brightly with a 66, twice US Masters winner Bubba Watson shot a forgettable 73 to tumble down the leaderboard into T46, level with Kuchar.

Defending champion Jhonattan Vegas of Venezuela, who started one shot back of the leaders, shot 69 to be three behind Flores.

Graham DeLaet and Mackenzie Hughes, both at eight-under and in a share of 14th place, remain in the hunt to become Canada’s first homegrown champion since Pat Fletcher in 1954.

Ireland’s Graeme McDowell also missed the cut; he finished one over par on Friday, and three over par overall.