Out of Bounds: US PGA set for new lease of life as year’s second major 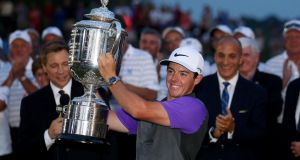 Rory McIlroy holds aloft the US PGA after winning at Valhalla in 2014. Photo: Getty Images

These are very interesting times in golf, not least the fact that Jordan Spieth is on the verge of joining a very elite club – currently five legendary players – who have accomplished the career Grand Slam. That feat could very well be achieved as soon as next month when the American, who celebrates his 24th birthday this Thursday, competes in the US PGA championship at Quail Hollow.

However, something else very significant could be confirmed at Charlotte, North Carolina, that week because the PGA of America have long had on the agenda the possibility of moving the US PGA championship out of its traditional August date and moving it forward in the calendar to May. That would have the knock-on effect of pushing The Players championship out of May and back to March, a slot in the calendar ahead of the Masters it previously occupied.

The reasoning behind the PGA of America’s deliberations on the possibility of moving from August to May has some logic. The return of golf to the Olympics last year in Rio de Janeiro impacted on the PGA more than any of the other Major championships and, going forward, with the confirmation that golf has been included in future Olympic Games, means that would be a recurring situation every four years.

The other reason behind shifting the PGA and, as a consequence, The Players returning to the March date two weeks before the Masters that it held up to 2006, is that the tournament schedule would be more streamlined with a Major a month from Apri to July, allowing the two main tours a cleaner run-in to their respective play-offs: the FedEx Cup and the Race to Dubai. Win-win-win scenarios.

A decision on the move – and it is one supported by 66 percent of tour players in a “Sports Illustrated” poll – could be effective as soon as 2019, when the PGA is scheduled to be held at Bethpage Black on Long Island, New York. It will mean considerably cooler temperatures too in May compared to an August date.

Some clues have been dropped along the way these past few months which would indicate what direction the PGA of America are headed; and – although there are complications such as television rights issues etc involved – it would seem to set to happen within the next couple of years, moving the US PGA, where Spieth could yet make history next month, to the second of the four Majors in the calendar rather than the bookend closing the seasonal quest for glory.

If it were to happen, and the odds look that way, then the British Open – traditionally the third of the four Majors – would become the final Major of the year.

How would that fit the R&A? Quite fine, it seems.

As Martin Slumbers, the chief executive put it, “I think from our perspective I don’t really mind whether we’re the third major or the fourth major. We try to do our very best with The Open Championship to make it as good as we possibly can do. I can absolutely understand some of the logic, and if it ends up as resulting in more people watching our game, then that’s a great outcome.”

Tradition is about to change, me thinks.

Leo Cullen: ‘a good chunk of the guys who are injured will be back’ 06:15
Rachael Blackmore’s Grand National victory resonates around the world 06:00
Louis and Robinson may have died broke but their legacy is timeless 06:00
Potential of Parsons and Wall put French and English on notice 06:00
Ken Early: It’s time for Alexander-Arnold to move to the middle 06:00
Here is your handy guide to sport on television this week