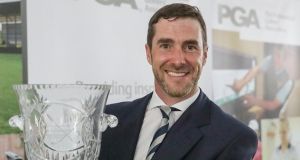 An Irish PGA Professional who puts his life on the line as a volunteer coastguard has won a prestigious award for his charitable work and selfless efforts.

Philip Ring (38), corporate account manager at online retailer McGuirks Golf, received the Toby Sunderland Award during the PGA’s annual reception on the eve of the Open Championship at Royal Birkdale.

The accolade is handed out each year to celebrate the many wide-ranging charity achievements by PGA pros across Britain and Ireland. Their annual fundraising efforts, for example, amount to thousands of euros and involve a variety of activities. Sponsored marathons and non-stop rounds of golf are commonplace. Ditto pro-am golf days and memorabilia auctions.

Ring, however, prefers to give his time rather than money in his role as a volunteer coastguard based in Howth. “Raising money is one thing but giving your time is something else,” he said. “That’s very important as far as I’m concerned. Time is money.”

Ring was generous with his time when Michelle, his sister, faced having to move into a care home following the death of her husband in 2011. Stricken with multiple sclerosis her brother ensured she could spend her remaining four years in her own home by staying with her most nights of the week.

It was during those days that Philip became interested in the work of the coastguard and the death of his sister followed by his brother’s soon afterwards prompted him to re-assess his life.

“Just before Michelle passed away I was living with Christina, my future wife, near the coast,” he recalls. “I kept seeing the chopper going past and was intrigued as to what was going on.

“So I asked if they were taking people on. They were and 40 people applied for the position, 12 were shortlisted and they took three, one of whom was me.

“It cost €22,000 to train me over a two-year period and the training was intensive. It included personal survival, first aid, search and rescue. Everything. There was a lot involved.”

Since then Ring has been on call 24/7 and involved in more that 130 missions, 81 last year and 50 this. Some are straightforward, others life-threatening and traumatic.

Ring experienced more personal tragedy when his long-time friend and fellow PGA Professional, Liam Duggan, passed away aged just 37. And once more Ring put others before himself. This time his friend’s widow and two young children were the beneficiaries as a result of Ring winning the Toby Sunderland Award.

“The award carries a prize of £1,200,” said PGA chief executive Robert Maxfield when presenting the trophy and commemorative plaque to Ring.

“But he’s asked us to put the money in the PGA Benevolent Fund and pass it on to Liam’s wife and two very young children.

“Warren Sunderland – Toby’s son – and I cannot think of a more worthy winner.”

Top field for South of Ireland

Nine of the 11 players who helped Ireland win the Home Internationals crown last season will tee it up in the 116th South of Ireland Amateur Open starting at Lahinch on Wednesday.

Missing from the line-up are Paul McBride, who has accepted an invitation to play in the Porsche European Open on the European Tour and Co Sligo’s Sean Flanagan, who is doing exams.

– and it is arguably the strongest South of Ireland field for years.

Royal Portrush’s Tyrone Clarke, the son of 1990 champion Darren Clarke, will also be making his debut in the South having reached the second round of the North earlier this month.

After five days of excellent golf at Mallow, Mairead Martin from Kanturk is the 2017 Irish Girls’ Close Champion. Having qualified in third place, Martin cruised to the final with comfortable wins in all her matches. The final saw her face Rosses Point girl Maeve Rooney, who had knocked out leading qualifier and girls’ International Rachel Thompson (Cork) in the semi-finals.

Martin set her mark early with a win at the first hole and didn’t ease up from there. Four up at the turn, birdies at the 10th and 11th saw Martin go six up with seven to play. And the Co Sligo star finished the match in style with an eagle at the par-five 12th.

In the final of the Pat Fletcher Trophy, Leah Temple Lang from Elm Park beat Sara Byrne from Douglas at the 19th.

After two great contests over the last two weekends it is the men from Ballina who triumphed over a gallant Castle Dargan side to capture the Cecil Ewing Shield as provincial winners of the All Ireland Fourball.

Ballina now go on to represent Connacht at the national Finals in Millicent Golf Club on September 16th and 17th.

The ground work for the win was established in the first leg at Ballina where the home side ran out 5-0 winners. Despite a determined approach with two early wins from the Home side, Ballina secured the required match point in game four to secure and overall win by 7-3.

Next best for Ireland was Keaton Morrison from Greenacres, who signed for rounds of 73, 72, 78 and 76 to finish on 299 for a share of 23rd place. Morrison and McKibbin were the only GUI players to survive the 36-hole cut, which fell at plus six.

The Castle in the Barton Shield and Mountrath in the Jimmy Bruen Shield will be the Leinster representatives in the All Ireland finals at Carton House in September.

Castle defeated the host club Kilkenny by just one hole with Robert Moran and Alex Gleeson beating Paul O’Hara and Luke Donnelly one up while Alan Lowry and Jack Walsh halved with Mark Power and Richard Walsh.

It was just as close in the Bruen Shield where two matches went to tie holes and two finished on the 18th as Mountrath edged out Clontarf 3-2.

Paul Kealy and Dean Russell gave Clontarf the early lead with a 2 and 1 win over James Coss and Michael Brennan. It was one each when Martin Carrol and Paul Darling won one up against Stephen McCarthy and Kevin Leech. A 19th hole win for Colin Bergin an Joe Carroll for Mountrath over Stephen Kealy and Alex Tyrrell was cancelled out when Clontarf’s Michael Fahy and John Stone won on the 19th against Pascal Dunphy and Matt Kennedy Motts.

The final match gave Mountrath the Leinster title when Martin Gaughan and Aidan Manicle won on the 18th against Clontarf’s Sean Kellett and Ger Keevy.

With nine qualifying events completed, which have been played over the past 12 months, the team to represent Europe at the PING Junior Solheim Cup in August has been confirmed.

Sweden’s Amanda Linnér, Linn Grant, Frida Kinhult and Beatrice Wallin, along with France’s Mathilde Claisse and Italy’s Letizia Bagnoli, all gained automatic spots on the European team by finishing in the top-six of the PING Junior Solheim Cup European ranking table. They will be joined at Des Moines Golf and Country Club by Austria’s Emma Spitz, Sweden’s Julia Engström and Maja Stark, Germany’s Esther Henseleit and Italy’s Alessia Nobilio and Alessandra Fanali, who were all selected as wildcard picks by European Team Captain, Alison Nicholas, following the conclusion of the European Girls Team Championship at St Laurence GC, Finland.

The 2017 event in Des Moines, Iowa, on August 15th-16th, marks the ninth time the European PING Junior Solheim Cup team will battle against the US Team, which currently lead the series with five wins, two losses and one tie.

Jonathan Caldwell moved up to third on the PGA Europro Tour money list and into position to graduate to the Challenge Tour at the end of the season when he won the Cobra Puma Golf Championship by two shots at Machynys Peninsula Golf Club in Llanelli, Wales.

A Walker Cup star and foursomes partner for Rory McIlroy at Royal County Down in 2007, the 33-year old Clandeboye man carded rounds of 66, 72 and 69 in wet and windy conditions to triumph on nine-under par 207. England’s Jason Timmis was two shots back in second place on 209 after rounds of 70, 72 and 67.

Caldwell is now third in the Race to Amendoeira which awards Challenge Tour cards to the top five money winners at the end of the season.

Damien McGrane won his fifth tournament in a row last week at the Royal Curragh Pro-Am sponsored by Newbridge Silverware. McGrane’s six under par round of 66 gave him a one shot advantage over Simon Thornton (Simon Thornton Golf), David Higgins (Waterville Links) and Brendan McGovern (Headfort).

The 46-year-old clearly enjoys playing at the Co Kildare venue. In 2015 he carded a nine under par 63 on his way to victory and this success was his third win in a row at this event.