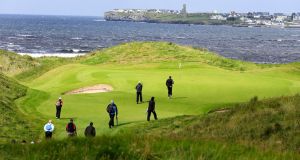 They say happiness is a long walk with a putter but for Mallow’s James Sugrue it wasn’t just his touch on the greens that gave him his first major win, but a deadly combination of ball-striking brilliance and calmness under pressure.

Few can remember a tougher South of Ireland Championship as a relentless westerly wind, gusting up to 40 mph for the Pierse Motors Volkswagen sponsored classic, buffeted the players for five days in a row.

In the end, it was a case of survival of the fittest – physically, mentally and technically – and eventual runner up Conor O’Rourke graciously conceded that he was beaten by the better man.

“It was the middle part of the round, and I think he just got on top of me,” a bitterly disappointed O’Rourke said of that crucial run from the 10th to the 13th where Sugrue combined nerveless putting and clever course management with a sprinkling of good fortune to lay the foundations of a thorughly deserved 3 and 2 victory.

“He probably got those little breaks you need to win an event which I got to win the St Andrews Links Trophy last year. But to be honest, I am not as disappointed as I thought I might be to lose a final. I played really nice golf, and James just played better.”

A strapping 20-year old with a Connacht Boys, a Munster Youths title and three years of international boys golf on his CV, he was considered something of an underachiever until yesterday.

Relentless from tee to green, he had an epiphany at Baltray in June when he realised that he was going nowhere unless he addressed his weakness on the greens.

“I had absolutely no confidence with the putter,” he said. “Hitting 15 or 16 greens and having 40 putts was a regular occurrence.

His decision to learn the AimPoint method under Gareth McShea at Edmondstown was every bit as important as the years of hard work he had done on his swing with Mark Collins at Mallow Driving Range.

It was a major wake up call on a par with the elaborate plans he made to avoid oversleeping for his 8.45am showdown with Irish Amateur Open champion Peter O’Keeffe.

After being disqualified for missing his first round tee time in the “North” a few weeks ago, Sugrue joked: “I had a wake-up call, two alarms set and my caddie ringing me and my Mam ringing me at 7 am this morning. There was no way I was sleeping it in this time!”

O’Keeffe was left wishing one of them had stayed in bed after watching Sugrue hole four 10 footers in the space of five holes to beat him 2 and 1.

It wasn’t just putting that beat O’Rourke but a series of superb tee shots and raking long irons on the 6,950-yard Old Course that was at its pristine best.

The Naas man was sensational all week, coming out on top in the longest match in the history of the “South” on Saturday morning when he beat Laytown and Bettystown’s Thomas Mulligan on the 27th before eliminating leading qualifier Rowan Lester on the 18th in the quarter-finals.

In the semi-finals, O’Rourke was again superb as he hit West of Ireland champion Barry Anderson from Royal Dublin with a birdie barrage to win 3 and 2.

But he had to take his hat off to the ball-striking brilliance and sure touch of an inspired Sugrue in the final.

The Mallow man rolled in a 35 footer for birdie at the first, halved the second in birdie and then won the third with a par and the fourth with a conceded eagle three to go three up.

O’Rourke won the fifth, lost the seventh but took the eighth in par and the ninth in birdie to be just one down at the turn.

But he admitted that match was decided in the first four holes on the back nine as Sugrue won the 10th in par to go two up again, holed a 25 footer for a half in par at the short 11th and then pitched in from more than 20 yards for eagle at the 12th to go three up.

Facing a slick 18 footer from the back of the 13th, he was fortunate that his speedy putt hit the back of the hole a thump and finished six inches away rather than trundling 20 feet away down a tier.

After bravely holing from 10 feet to stay alive at the 15th, where Sugure his a glorious, 198 yard three iron to 15 feet, O’Rourke overshot the 16th and narrowly failed to chip in, leaving Sugrue two putts for the title from 12 feet which he duly took.

The champion conceded that the 25 footer he holed for a half at the 11th was “big”. But his eagle at the par-five 12th arguably broke O’Rourke’s heart.

“You can reach it all day long but there is no way you are keeping it on the green with that wind at your back,” Sugrue said. “It is a relatively easy chip from short. So I hit an eight iron from 240 yards and knew I wasn’t going to get up.”

With O’Rourke just six feet away in three, Sugrue chose a 60-degree wedge and nipped it perfectly.

“A few hops and down she dropped,” he said.

Thrilled to win Munster’s flagship event after missing the cut in his first two appearances, he said: “I am absolutely delighted. Outside the Irish Amateur Open, this is the one I wanted to win because I’m from the south and because it’s Lahinch. ”