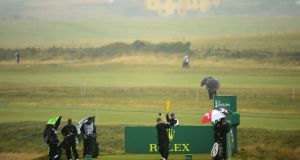 Eamonn Darcy tees off on the 13th hole during the second round of the Senior Open Championship at Royal Porthcawl. Photograph: Richard Martin-Roberts/Getty Images

Des Smyth and Mark McNulty sneaked inside the cut at the British Senior Open Championship at a rain-lashed Royal Porthcawl last night but Paul McGinley was among five Irishmen departing early.

Smyth and McNulty – himself a 16-time European Tour winner – were both out early yesterday morning but, after rounds of 79 and 80 respectively left them 13-over par overall, they had to play the waiting game before learning they were right on the cut mark and therefore will now play the final two rounds.

As it ultimately turned out, a birdie on the last for both men ensured their progression with the pair 12 strokes off the lead heading into this morning’s third round.

With the South Wales coast once again battered by driving wind and rain, the field struggled for a second successive day in atrocious conditions with many describing the inclement weather as some of the worst they had ever faced.

Only one player across the entire field managed to come in under-par on day two – Spaniard Santiago Luna (70).

It certainly proved to be a debut to forget for former Ryder Cup captain McGinley. The Dubliner had been downbeat after his opening 75 and there was no respite yesterday with a brutal 14-over par 85.

McGinley looked in deep trouble when, having already had a difficult start to his round, he suffered a nightmare on the par-four ninth hole where he dropped four strokes. That meant he reached the turn eight-over par.

He was unable to arrest that slump on the back nine with another six bogeys which left him 18-over for the tournament – and five strokes outside the cut for 70 and ties.

Meanwhile 1995 Ryder Cup hero Philip Walton – having qualified earlier in the week at nearby Southerndown – ended one stroke outside on 14-over par while Brendan McGovern and Ronan Rafferty were 15-over.

Eamonn Darcy was also well back on 18-over on a desperately disappointing day overall for the Irish.

It was also tough going at the top of the leaderboard.

Bernhard Langer, who began the day with a one-stroke lead after his two-under 69 on day one, shot 74 and the German master heads into round three locked in a five-way tie for the lead on one-over par.

Englishman and record 25-time European Senior Tour winner Carl Mason, who with 70 was one of only three players under-par on day one, collapsed with an 85 yesterday but just made the cut on 13-over.

Langer shares the lead with American trio Steve Flesch, Billy Mayfair and Tom Lehman as well as Mauricio Molina from Argentina – the only other player to shoot an under-par round in the tournament so far (70 on day one).

Jason Day remains in contention despite bizarre series of events 22:39
Klopp says failure to make the Champions League will not see players leaving 22:35
Andrew Coscoran runs best of the Irish in 1,500m final 22:28
Munster overcome gutsy Connacht to reach Pro14 final 21:56
Glory game sweet solace for Gündogan as he copes with lockdown loneliness 21:30
Here is your handy guide to sport on television this week