Jason Day determined to protect number one spot from rivals 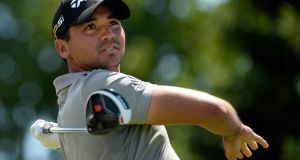 Dustin Johnson or Hideki Matsuyama can reach the top of the world rankings for the first time this week, but current number one Jason Day is determined to prevent that from happening.

US Open champion Johnson needs to win the Genesis Open and for Day to finish worse than a three-way tie for third to claim top spot at Riviera Country Club.

A sixth win in his last 10 worldwide events will make Matsuyama the first male Japanese player to become world number one, but only if Day finishes lower than a two-way tie for 24th.

“They don’t give trophies for it, it is more of a pride thing at the end of your career; you want to know how many weeks you were at number one,” siad Day, who was fifth in last week’s AT&T Pebble Beach Pro-Am.

“To get there even for one week is pretty special. No one can take that away from you, which is great.

“I said earlier that to be number one for a calendar year would be great, but I need to just focus on what I need to do because you can’t really focus on staying number one.

“The more you focus on the actual target itself, the more you attach yourself to it, you make mental errors out there, you get more frustrated, you do silly things on the golf course that you shouldn’t be doing.

“I need to focus on hitting the shot in front of me, going to the next shot and hitting that and trying to beat everyone else because I know that as long as I win, it will take care of it.

“If someone takes it off me, I’m okay with it. I’m not going to be angry or sad about it. Just goes to show that I need to work harder, need to be smarter and try and win more tournaments.”

Despite the absence of the injured Rory McIlroy and Tiger Woods, the strongest field of the year has assembled at Riviera, with eight of the world’s top 10 competing along with defending champion Bubba Watson.

Pebble Beach winner Jordan Spieth will be looking to claim back-to-back wins for the first time since 2015 and is full of confidence after form figures of 3-3-9-1 in 2017.

“I feel as confident in my game now as I felt going back to there [2015],” the two-time Major winner said. “I feel very confident throughout.

“I’m not sitting here saying I’m going to play better than last week, but I’m very confident in how my game is now and I feel really good about things.”