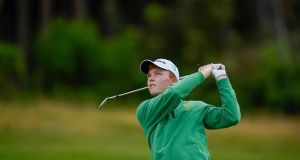 Ireland’s Robin Dawson had to settle for the runner-up spot in the South African Strokeplay Championship won by Frenchman Edgar Catherine at Kingswood Golf Estate.

Just two years after France celebrated their first champion in the championship, the 18-year-old from the South of France overcame his ‘Kingswood demons’ to march to a two stroke victory on 11 under 269. Catherine also became the third successive international winner when he followed last year’s champion Jack Hume from Naas into the winner’s circle.

Catherine produced rounds of 66, 68 and 65 at the par-70 layout to start the final round just one shot shy of Dawson, who was eyeing an Irish double.

Catherine gained the upper-hand early on after Dawson surrendered four shots at the fourth, fifth and sixth holes, but he also stumbled with back-to-back bogeys at seven and eight. The Frenchman birdied the 10th to get his challenge back on track and opened up a two shot lead on Dawson with another superb birdie at 14.

At the par five 16th, he missed the green left, but produced a magnificent chip shot out of the valley to leave himself a two-footer for birdie. A three-putt bogey at 17 gave Dawson a glimmer of hope, but Catherine drove the middle of the green at 18 and two-putted for 70 and a two-shot win on 11 under par 269.

Massereene’s Tiarnan McLarnon was best of the Irish in seventh place as Thomas Mulligan came home tied 13th in the Portuguese International Amateur Championship at Montado. McLarnon started the day tied for second following the disqualification of Ayoub Id Omar, three strokes behind England’s Joshua McMahon on five under par at Montado Golf Resort near Lisbon.

In the end, things didn’t go the former Irish Close champion’s way as he made three birdies and six bogeys in a three over 75 to go with earlier rounds of 69 72 70 to finish six shots behind Finland’s Sami Välimäki, who came back from a double-bogey six at the first to card a four under 68.

Mulligan, who was tied seventh overnight, ended the week joint 13th on one-under 287 after rounds of 69 71 73 and a 74 that started with the Laytown and Bettystown man making a triple bogey seven at the first for the second day running. He also bogeyed the 14th but eagled the par-five 17th to undo some of the damage.

Pat Ruddy, has confirmed that he will host the second edition of the Ruddy Cup for Young Professionals at The European Club on May 5th. The inaugural edition of this 18-hole event, which is limited to registered PGA trainees, was won by Ciaran Molloy last year. He has since qualified as a professional and is therefore ineligible to defend his title.

Ruddy admitted that there is some ‘selfishness’ behind his decision to support aspiring PGA professionals. “I like to know these guys. I used to know every professional in Ireland back in the 60s, 70s and 80s,” said Pat.

“I am out of touch a bit now so it is nice to see who are the young fellas coming through. I also wanted to give these players going down the PGA route a bit of encouragement. This tournament gives the guys a chance to get a day out of the shop, play a bit of golf and stay competitive.”

PGA in Ireland secretary Michael McCumiskey added; “We have enjoyed the support and patronage of Pat Ruddy for many years and we’re delighted that he has committed again to sponsoring The Ruddy Cup on the prestigious European Club layout.

“We look forward to seeing how the young pros show their skills at this venue that hosted three Irish Championships from 2007 to 2009, all won by Padraig Harrington. We all look forward to visiting The European Club at the beginning of May.”

March will be a busy month for the Ireland Boys’ team as they face matches against Spain and Wales. The Golfing Union of Ireland has named two different teams for their upcoming internationals against Spain (La Manga, March 11th and 12th) and Wales (Rosslare, March 18th and 19th).

March 3rd is the closing date for entries to the new R&A Nine-Hole Championship which will culminate in a final played over the back nine at Royal Birkdale Golf Club on the morning of Saturday July 15th 2017.

Four lucky pairs from Ireland will play in the final. The GUI/ILGU will run four nine-hole Regional finals in June 2017 (dates and venues to be confirmed) with the winning team pair from each regional final qualifying for Royal Birkdale.

Each Golf Club affiliated to both the ILGU and the GUI is eligible to compete in this competition. Participating clubs will run club qualifiers over nine holes, the winners of which will represent their club in one of the four regional finals.

The Club may organise the qualifier - at their discretion - in one of the following ways:

- Separate nine-hole Men’s and Ladies’ competitions (the winner of both going forward as a team to represent their Club at the regional final).

There are no individual upper or lower age limits for this competition; however, a pair may only include one player (male or female) who is under 18 years of age in the year of the event.