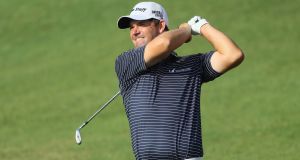 Padraig Harrington is continuing to struggle with a shoulder injury and may not play at this week’s Genesis Open. Photo: Andrew Redington/Getty Images

Innovation is something of a buzz word in golf these days and it so happens that Dubliner Stephen Browne – a former tour player turned software developer – is to the fore in the attempt to make the sport more interesting, especially for the so-called “average player.”

Browne, Seán O’Flaherty – yes, Rory McIlroy’s manager! – and Daniel Lewis are the brains behind the VoxGolf app that has been successfully trialled in a number of Irish golf clubs and recently rolled out nationally all with the potential to make a global impact.

A former European amateur champion who turned professional relatively late in life at the age of 27, Browne had two tournament wins on the Challenge Tour – in Norway (2004) and Kazakhstan (2005) – and also sampled life on the main tour before calling it a day in 2008.

“When I retired in 2008 I didn’t know there was going to be a market crash and a job crisis and I was very lucky to get into a software company and I have loved it, this phase of my professional life, being able to marry the two together is absolutely just bulls-eye for me in terms of what I want to be doing, and to actually help the game in some small way would be a great by-product of that,” said Browne of how his professional career panned out.

Two years in research and development, VoxGolf is an app that facilitates non-traditional golfing competitions be it six-hole, nine-hole or, for example, three separate and distinctive six-hole competitions within a round. Clubs – or societies, groups of friends, basically anyone – can also sign-up to open an account which is available on Android and Apple free of charge.

Aware that golf is not all about the elite players, Browne and his associates felt it was more than just about reducing the time on a golf course. “The average handicap of a player is something like 19, so most people that go out to play golf aren’t that competitive and, if you have a bad start, and most golfers if you look at the handicaps are typically not going to get off to a great start, (having) three six-hole competitions in the 18 holes keeps people interested and engaged in the game because they know there’s another competition coming up.”

Every golf course in Ireland is available on the app, with the intention to develop it internationally. “We wanted to prove the concept here and then take it elsewhere,” explained Browne who, having spent time on tour, is enjoying this second golfing career.

Pádraig Harrington will only play in this week’s Genesis Open at Riviera if given the medical go-ahead from a specialist in Los Angeles, after the Dubliner confessed to growing concern over an injury to his left shoulder which has resulted in a persistent “tingling sensation” and reduced the amount of power in his tee-shots.

The 45-year-old Dubliner has missed all three cuts he has played so far on the PGA Tour stateside, his disappointing run extending to last week’s Pebble Beach pro-am after similar missed weekends at the Farmers Insurance Open and the Phoenix Open.

Harrington sustained the injury late last season, following his win in the Portugal Masters, but believed it would respond to treatment and anti-inflamatories. However, the persistent tingling sensation has caused him to reappraise the nature of the injury with a visit to a LA specialist on the cards ahead of the tournament at Riviera.

Graeme McDowell, who had a short break after playing back-to-back tournaments on the European Tour’s Desert Swing in Qatar and Dubai, resumes his PGA Tour season at Riviera while Shane Lowry – who finished tied-14th in Pebble Beach – will complete his four-week stretch stateside. Lowry jumped 22 places in the FedEx Cup standings, from 98th to 76th, following his performance on the Monterey peninsula.

Although not scheduled to resume tournament play until the WGC-Mexico Championship in a fortnight’s time, world number two Rory McIlroy has started hitting wedge shots as part of his recuperation programme for the stress fractures he sustained to his ribs last month.

“It wasn’t far off, I knew it wasn’t, it was just a matter of one goes, they all start going, the hole looks bigger. So, that fortunately happened going from one of my favourite courses in the world to one of my favourite this next week to try and carry on this momentum as we dive into the season” – Jordan Spieth on turning a cold putter hot, as he moves on from his win at the Pebble Beach pro-am to the Genesis Open at Riviera.

“I’ve got a good feeling about this year and I don’t know what it is. I had a good feeling about this week. It was my mum’s birthday on Tuesday so I knew that something good had to happen. We were warming up on the putting green and my mum’s favourite film was Dirty Dancing, and they were playing the theme tune to Dirty Dancing, and I said to (her caddie) Benji, ‘I’ve just got a feeling about this week, it’s fate, you know?’” – England’s Mel Reid on winning the opening event of the Ladies European Tour season, the Vic Open in Australia. Reid beat Germany’s Sandra Gal in a play-off.

3/3/0: There are three Irish players in the field for the Genesis Open in Los Angeles: Shane Lowry, Graeme McDowell and Pádraig Harrington.

There are three Irishmen competing in the Dimension Data pro-am on the Sunshine Tour in South Africa: Gavin Moynihan, Jeff Hopkins and Gareth Maybin.

The World Super 6 in Perth, Australia – this week’s event on the European Tour – won’t have any Irish representation!

“Really looking forward to seeing everyone @genesisopen . . . . unfortunately I won’t be able to play” – Tiger Woods in confirming he’ll be at Riviera as a charitable host but not playing, as he further recuperates from his back injury.

“Playing @genesisopen this week and then back east for @TheHondaClassic week after #letsgo” – Graeme McDowell aiming to hit the ground running in playing back-to-back weeks on either side of the USA.

“Congratulations @fabrizanotti on a specular @EuropeanTour victory. Superb final round and to finish will an eagle is remarkable! GP” – the tip of the hat from Gary Player to Paraguay’s Fabrizio Zanotti on his win in the Maybank Championship, which moved him to second on the Race to Dubai standings.

Q: A player’s ball lies under a tree. The player deems the ball unplayable and drops a ball three club-lengths from where the ball originally lay. Before playing, he is informed that he dropped the ball in a wrong place. The player lifts the dropped ball under Rule 20-6 and realises that, if he drops the ball within two club-lengths of the spot where the ball originally lay, it is likely to be unplayable. May the player replace the ball in its original position, incurring a penalty stroke under Rule 18-2?

After lifting a ball, a player is entitled to replace it in its original position only if he has not yet put it back into play under an applicable Rule. However, in that case, the player may incur a penalty of one stroke under Rule 18-2 for having lifted his ball without authority.