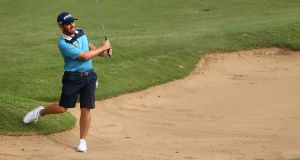 The new format will see the field reduced to the top 65 and ties as usual after 36 holes, with a further cut after 54 holes to determine the top 24 players for Sunday’s match play stages.

Any ties for 24th place will be decided by a play-off on the 18th hole at Lake Karrinyup, while the top eight qualifiers receive a bye in the first round of the six-hole match play contests.

Matches tied after six holes will also be decided in a play-off using a “shootout” hole which utilises the existing 18th green and a new tee located around 100 yards away.

“It’s my second time here and I have a lot of good memories of this place, so I’m looking forward to the week,” said Oosthuizen, who is effectively the defending champion after winning the Perth International at Lake Karrinyup last season.

“I think it will be a mindset thing this week, where you’ve got to realise that the stroke play is just a qualifier to get into Sunday. You can have a five-shot lead and lose your first round in match play and off home you go.

“So it’s definitely the mindset I’ve got that the first three days are just to qualify to get to Sunday and then see what that presents. I think it’s a bit like when I played the qualifying school — you don’t have to go out and win the Q-School.

“If you finish top eight or top 10 it’s just as good for a tour card and it’s just a way of getting through the year.

“I think it’s going to bring everyone closer; six-hole match play is going to be tough. You’ve got to have the same mindset of the last few holes in a tournament, otherwise you’re out of here.”

Oosthuizen has a good recent record in match play, losing out to world number one Jason Day in the final of last year’s WGC-Dell Match Play and reaching the quarter-finals in 2015 and 2014.

“I think match play is the closest you get to that adrenaline of going down the stretch looking to win, because it’s ripe for a win even if it’s just to win the match and go on to the next one,” the 34-year-old South African said.

“You feel that adrenaline and you feel that situation where you’ve got a chance to win, you have to do something to win and that’s great. So I think in match play you’ll see probably a few more riskier shots which you wouldn’t see in stroke play. It should be a very exciting Sunday.”