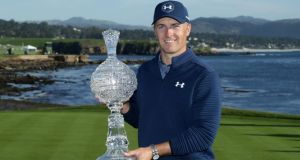 Jordan Spieth has ended a 13-month wait for a PGA Tour title by winning the AT&T Pebble Beach Pro-Am by four shots.

The two-time major winner went into the final round with a six-shot lead after a birdie-fest in the third round and he got the job done on the final day, carding a two-under-par 70 to finish on 19 under.

Birdies at holes 2 and 17, along with 16 pars, were enough for Spieth to claim his first tour title on American soil since winning the Hyundai Tournament of Champions last January. He did win on the PGA Tour of Australiasia in November.

“I could afford to make a couple of mistakes today if I needed to but fourtunately I didn’t and managed to stay ahead,” Spieth said on Sky Sports 4.

Kelly Kraft came second on 15 under after making six birdies and a single bogey in his round of 67 while Dustin Johnson was third a shot further back.

World number one Jason Day was one of three men to finish on 12 under and Luke Donald was the best placed Brit on six under.

It was Spieth’s ninth tour title and, aged 23, he is the youngest person to reach that landmark since Tiger Woods.

He is looking for more to follow as well.

He added: “It has been a tremendous four years on the PGA Tour with ups and downs. I am really looking forward to what is to come, I have had four great starts to the new year.

“I am going down to the Riviera (Country Club) next week and I am not going to let up.”

Jason Day remains in contention despite bizarre series of events 22:39
Klopp says failure to make the Champions League will not see players leaving 22:35
Jakob Ingebrigtsen steps out and back in again to claim gold in Poland 00:16
Munster overcome gutsy Connacht to reach Pro14 final 21:56
Glory game sweet solace for Gündogan as he copes with lockdown loneliness 21:30
Here is your handy guide to sport on television this week