Out of Bounds: Ireland’s women golfers deserve an Irish Open 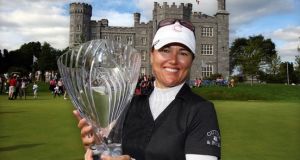 Four-time Ladies Irish Open winner Sophie Gustafson with the trophy after her victory at Killeen Castle in 2010. The tournament hasn’t been played since 2012. Photograph: Inpho/Cathal Noonan

The women golfers of Ireland are being badly let down. A couple of weeks ago the Ladies European Tour released its schedule of events for 2017 and it came as no surprise to anyone that, yet again, an Irish Open was not on its itinerary. It’s been that way every year since the tournament’s demise in 2012, only five years ago, but wasted time has a habit of stretching beyond a point of any repair.

I remember a few years back being in a room of the Royal College of Physicians on Dublin’s Kildare Street, where framed portraits of reverential men, past presidents of the college, stared down from the ornately plastered walls. It was in the countdown to the Solheim Cup in 2011 and, on that day, a man’s voice could be heard above all others as he embraced what the staging of the Solheim Cup would mean to the country.

The man in question was Leo Varadkar, who, lest we forget, was then the Minister for Sport. He told us how a projected €35 million would be brought into the Irish economy, of how it would provide a marketing boost to golf tourism, of how it would reach 400 million homes worldwide through television exposure. “It’s the kind of showpiece event that can help to regenerate the Irish economy,” he added, admittedly with a touch of hyperbole.

Whatever about regenerating the Irish economy, the actual event - which took place at Killeen Castle in Dunsany, Co Meath - ticked virtually all the boxes, even allowing for the dreadful weather, and certainly inspired many young girls, among them the Maguire twins, Leona and Lisa, who could be found in the galleries.

The foundations for that Solheim Cup had been laid by the staging of the Ladies Irish Open over a number of years. Historically, the Ladies Irish Open has had its share of ups and downs. First staged in Northern Ireland in 1983 and 1984 (when it actually was part of the LPGA Tour), it skipped a year in 1985 and, after its reappearance in 1986, it disappeared and wasn’t held again until 1994 when it was staged at St Margarets in north county Dublin.

From 1999 to 2003, the Ladies Irish Open worked its way around the country. From St Margarets to CityWest to Luttrellstown Castle initially, it broke free of the capital to Ballyliffin to Letterkenny to Faithlegg and finally a two year stint in Killarney. Then, it stopped. For four years, until it was revived again in 2008 at Portmarnock Links where life was breathed back into the tournament and it actually was elevated to one of the very best on the Ladies European Tour.

For five years, the Irish Open - with one eye on building momentum towards the Solheim Cup - really thrived. The winners were top notch: Suzann Pettersen, Sophie Gustafson (a four-time winner of the title) and Catriona Matthew - all of them international superstars - lay hands on the crystal trophy.

Then, sadly, it stopped again. Matthew, a Scot and a Major champion, was the last player to lay claim to the title at Killeen Castle back in 2012.

The absence of an Irish Open from the LET calendar has now stretched to five years, which is a crying shame. You talk to Pádraig Harrington or Paul McGinley or even Rory McIlroy and they tell stories of how they were inspired by attending the Irish Open as youngsters, of days which McGinley recollects as ice-cream days because the association was of good weather at links courses like Portmarnock and Royal Dublin.

There is no historical base of women tour professionals here, unfortunately. Where Harrington and McGinley could be inspired by the O’Connors, Senior and Junior, or Des Smyth winning out on tour, young girls didn’t have the same role models. As Stephanie Meadow told me recently, “I would love to have had an Irish female that I could have looked up to when I was younger.”

Meadow is seeking to become a such role model and, behind her, there is the potential for even greater things: Leona Maguire - a winner again on the US collegiate circuit in recent days - is the long-time number one in the world amateur rankings and Olivia Mahaffey is ranked fifth.

It’s only a matter of time before they turn professional.

But unlike their male counterparts who will be competing in an Irish Open with wheelbarrows of money, there isn’t any Ladies Irish Open at all. Someone needs to embrace the vision of what the return of the Ladies Irish Open would bring to golf in this country; it’s the very least that women golfers - and spectators - deserve going forward.