Tiger Woods cancels press conference due to back spasms 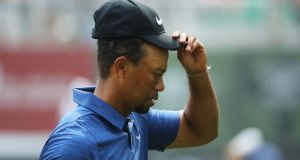 Tiger Woods has been forced to pull out of a press conference due to back spasms. Photograph: Warren Little/Getty

Tiger Woods has cancelled a press conference ahead of the Genesis Open as he continues to struggle with the back spasms which forced his withdrawal from the event.

Woods had been due to speak to the media on Tuesday as the tournament benefits his foundation, but initially postponed the press conference at Riviera Country Club by 24 hours.

Tournament organisers then announced late on Tuesday evening that Woods has been “advised by doctors to limit all activities” as he tries to recover from the spasms which saw his latest comeback aborted earlier this month.

“This isn’t about him not doing a press conference. What is going to be accomplished? What is he going to say? That he hopes his back spasms calm down.

“This is about the Genesis Open, the Tiger Woods Foundation and supporting Hyundai and his foundation. He is doing all he can without having to get up and move around all that much so that he can put himself in the best position to recover.

“He is just having a hard time getting these spasms to calm down. And he’s working on that on an hourly basis. He’s got personnel working with him to help pacify that.”

Woods insisted he had not been in pain after an opening 77 in the Omega Dubai Desert Classic, but pulled out of what was just his third event since August 2015 before the second round.

Steinberg said at the time Woods was pleased it was a spasm, rather than the nerve pain caused by a back injury which required three operations in the space of 19 months.

However, a week later Woods also pulled out of the Genesis Open and Honda Classic and no date has been set for the 14-time major winner’s return to action.

In his first 322 starts as a professional, Woods withdrew from just five events. In his last 19 starts, he has withdrawn four times.

When it was suggested to Steinberg that the long-term prospects look bleak, he added: “To the outside world, it’s up to you to draw that conclusion.

“Tiger remains pretty confident in the fact that these spasms are something he knows will calm down. He’s just working around the clock to make that happen.

“He’s got an intense dedication to get back to the point where he can be out there practising and in public and working toward his goal.”