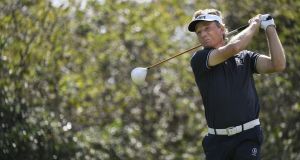 There is a running joke among players on the PGA Champions Tour that their best chance of derailing the dominant Bernhard Langer is his risk of a back injury from hauling away all his trophies.

When the season-ending awards were handed out, Langer, 59, won the Arnold Palmer Trophy as the senior tour’s leading money winner for the eighth time in nine years, and the one time he failed to do so, he was sidelined because of thumb surgery. He also collected the Charles Schwab Cup (his fourth) for the season-long points race, the Jack Nicklaus Trophy as player of the year (No. 6), and the Byron Nelson Trophy for the lowest scoring average (No. 5).

Langer won four times last season and never finished worse than 13th in 21 senior tour starts. He also played in the second-to-last group in the final round of the Masters at Augusta before stumbling to a 79.

“I’ve been known to be consistent, but not this consistent,” he said, calling the 2016 season “maybe the best year of my career.”

The president said that Langer, a German who lives in South Florida, had told him about being turned away from a polling place while others who appeared to come from foreign countries were allowed to remain in line. Langer, however, remains a German citizen and ineligible to vote in the United States, and he has said that the voting story was about a friend of his and that it had been relayed to the president by yet another acquaintance.

At a news conference for the Allianz Championship last weekend, Langer said he had spoken by phone with the president and received an apology for the confusion. “It was fun talking to him briefly,” Langer said, “and I thought that’s a great gesture from him because he’s got a lot of other things to be concerned about, not just, you know, this golfer Bernhard Langer. He’s got far more important things to do.”

Langer is his generation’s Gary Player, a fit, ageless wonder who outworks and outthinks his competition, and keeps on winning. “I’d love to throw Bernhard in the saltwater ocean and see if he rusts,” Fred Funk said.

In January, Langer picked up where he left off last season, earning his 30th win on the Champions tour at the Mitsubishi Electric Championship, a limited-field event in Hawaii. That’s second on the senior tour career victory list to Hale Irwin’s 45.

Peter Jacobsen, who splits time between the Champions Tour and as a golf analyst for NBC Sports, remembered seeing Langer double-hit a four-foot birdie putt and leave it two feet short. “I lost my breath,” Jacobsen said. “But the really amazing thing was the rest of the day, he putted pretty darn well. I thought, this is the toughest guy I’ve ever met.”

Langer, putting cross-handed, won the 1985 Masters, but in 1989 he again was dogged by such a bad stroke that he considered quitting the game. Langer said he prayed to God for guidance. “He said to persevere, so I persevered for a few more weeks,” Langer said. “Now we’re 28 years later.”

His salvation was inventing the armlock grip. By anchoring the putter against his left forearm, Langer won the 1993 Masters. He switched to anchoring a long putter against his chest in 1997, and turned a career disability into a strength. He ranked no worse than second in putting average on the Champions Tour in six of the last seven years. “Without question, he’s been the best putter I’ve ever seen from 8 to 15 feet,” said Jeff Sluman.

The US Golf Association’s anchoring ban, which went into effect at the start of 2016, brought concerns about whether Langer’s reign would end. Langer stuck to using the long putter, adhering to the rule by moving the club inches away from his chest.

Langer’s putting coach, Eric Kaplan, determined that his posture was the cause of his yips. He trained Langer to stand taller with his shoulders pinched back. “Whether he’s anchored or not, the engine is still in the shoulders, which is a more centralised engine as opposed to the more whimsical moving parts of the hands,” Kaplan said.

Can Langer, who turns 60 on August 27th, keep winning for several years? Only 23 tournaments have been won by golfers aged 60 and older. Irwin (still playing at 71), Tom Watson and Jay Haas (last year) are among those who have broken that barrier.

Funk predicts that Langer’s pre-eminence will continue and that he will surpass Irwin as the tour’s career victory leader. A strong rookie crop that includes former PGA Championship winner David Toms, 2017 Presidents Cup captain Steve Stricker and tour winners Steve Flesch and Jerry Kelly will make the task that much tougher.

“I saw Jerry quoted saying he was going to try and come out and dominate. Good luck,” Funk said. “You’ve got one mean guy standing in your way. Bernhard is playing at a level as good as he’s ever played.”

Langer brushed aside the observation that his intensity would weaken and with it his degree of success in his 60s. “My body is going to deteriorate some,” Langer said. “It already has. I’m aware of that. But it’s not a joke when I say I still think I can get better. I know I can. It’s just a matter of believing and having the right technique and the mindset of doing it.”

As for the threat to Langer’s back, Jimmy Gabrielson, the tour’s vice president for player relations, delivered the season-ending hardware to Langer’s home on the way to the Allianz event. “It’s become an annual tradition,” Gabrielson said. “This year I had to rent a Chevy Tahoe. Those trophies took up that much room.”

For once Langer was outside the top 10 at the Allianz, finishing 10 shots behind the winner Scott McCarron. New York Times Service