European Tour aims to ‘six’ up sport with GolfSixes event 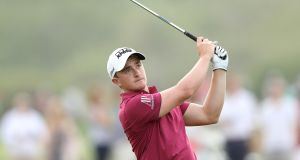 Paul Dunne is likely to head the Ireland team at the GolfSixes event in the Centurion Golf Club outside St Albans on May 6th-7th. Photograph: David Cannon/Getty Images

The European Tour is insisting on dancing to a new beat, with the launch on Sunday of a new – dare we say it? – glitzy team format called GolfSixes. This six-hole event will involve 16 two-man national teams competing in the inaugural weekend competition at the Centurion Golf Club outside St Albans in England on May 6th-7th.

The Players championship is scheduled for the following week at Sawgrass on the PGA Tour which means many of the marquee European players are unlikely to be available. However, European Tour chief executive Keith Pelley, who has been a strong advocate of adopting new golfing formats in an attempt to attract a younger audience, believes initiatives such as this six-hole event are entirely necessary to enhance golf’s appeal.

With Rory McIlroy, Shane Lowry, Graeme McDowell and Pádraig Harrington all set to play in Sawgrass, Paul Dunne is likely to head the Ireland team with a player of his choosing.

“It is another opportunity to try something different and then follow that up with significant consumer research with the people who attend or those who view it across multiple platforms,” Pelley said of the trial event. “It is very much an entertainment product. Depending how things go at Centurion, eventually you might want to build something [a venue] custom-made for this.

“The future of it? Who knows. We wanted to experiment with a completely new format, then go into the market and test that. It really has been a fun exercise to sit in a room and think about where this could go; having different countries generates incredible passion. This is created for a younger audience, for people who haven’t necessarily experienced our game as much. We want to get them engaged.

The €1 million tournament, with the winning team sharing €200,000, doesn’t have a sponsor but will instead be bankrolled by the European Tour. During the tournament, players will wear microphones, something which Pelley believes will be standard equipment in the future so that television viewers can listen in as players and caddies assess shots and situations.

On the first day’s play on Saturday, May 6th the teams will be split into four groups of four, similar to soccer’s Uefa Champions League group stages. The top two teams from each group then progress to the knockout stages – the quarter-finals, semi-finals, a 3rd-4th place play-off match and the final. These will all be contested on Sunday, May 7th.

In the group stages, three points will be given for winning a match with one point given for a draw. The matches themselves will be played in a greensomes matchplay format (see below). Both days’ play will be shown live on Sky Sports.

Players will also be encouraged to interact with the fans during play and in the intervals between their matches, including taking part in Q&A sessions in the fan zone, while live streaming on social media will further enhance the spectators’ experience and maximise reach.

Both players in each team hit tee shots on each hole. The best tee shot is selected and then the team alternate play of all subsequent shots required to complete the hole.

Matches will be played over all six holes with one point awarded for each hole won. The winner of each match will be the player with most points at the end of six holes.

For the group table: win = three points, draw = one point, loss = no points

In the case of a tie or ties in the group table after all matches have been played, each team’s total points differential from the three matches (similar to goal difference) will be used to determine the qualifiers to the knockout stages.

If this does not resolve the tie, this will then be decided by a hole-by-hole play-off on a shortened play-off hole on the 18th.