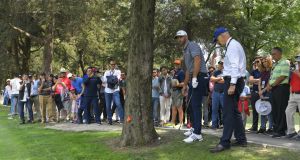 Dustin Johnson consults with referee Mike Stewart before getting a free drop away from a tree during the final round of the WGC-Mexico Championship. Photo: Getty Images

Sometimes, you just make your own luck . . . which, if you’re wearing the size 12 shoes of Dustin Hunter Johnson, is a nice place to be these days.

Okay, he’s had some heartbreak in the past, most notably being penalised for “grounding” his club in a waste area, which DJ believed to be a bunker, at the US PGA Championship at Whistling Straits. That penalty in 2010 denied him a place in a playoff, where he watched Martin Kaymer beat Bubba Watson.

But more often than not since then, he’s been on the right side of decisions. While the 2016 US Open is mostly remembered for the USGA’s handling of Johnson’s ball moving on the fifth green of his final round at Oakmont (he was given a one stroke penalty on review after he finished his round), it is worth recalling that he did get the (big) benefit of the doubt from a separate incident that day in being able to get a free drop from ankle-deep rough on the 10th hole due to a TV tower being in his line of sight.

Funnily enough, Johnson got to drop his ball into the first cut on that occasion and, would you believe, hit his shot over the same TV tower to the green in what proved to be a defining moment of his march to a maiden Major title.

And DJ had another favourable brush with the rules of golf en route to his win in the WGC-Mexico Championship.

It came in the final round Sunday where his ball finished up beside the trunk of a tree and, with barely a questioning of his shot-making options, Johnson was given the immediate benefit of the doubt, got a free drop (justifiable according to the exact letter of the law, it should be conceded) and went about making a most unlikely par.

Johnson’s free drop away from the tree truly raised eyebrows because of how his nearest challenger Rory McIlroy was treated a short time later. Johnson’s drop had come on the fifth hole; McIlroy, on the sixth hole, sought similar treatment after his ball too finished beside a tree but his request was declined by the on-course rules official Mike Stewart.

Not so much a case of one rule for DJ and another for Rors, although Johnson’s request wasn’t questioned in the slightest (which seemed odd) and it was a help that his 6ft 4ins frame and his size 12 shoes ensured his foot was touching a pathway when taking his stance!

Johnson’s take on his good fortune? “I thought I hit a good tee shot. It took a really big bounce and rolled up against a tree. But it was right next to the cart path. I mean, the only way I could play was back to the left. There wasn’t another option. I told the rules official, ‘Look, even if I try to get really close to this ball, I’m still standing on the cart path’. He agreed with me and I got relief. Yeah, I mean, that was a good break. To get a drop there, which I was entitled to relief, to save par was definitely a big boost.”

Where once upon a time Lady Luck seemed to frown on Johnson, it seems he tends to get the rub of the green more often than not these days. Born lucky? Or making your own luck?